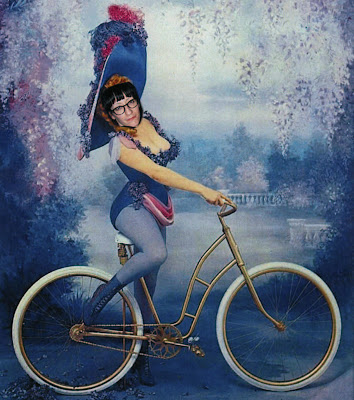 this morning- because i awoke insanely early and because last night, for the first time in a long time, i had absolutely nothing to do- i rode my bike.

i have neither ridden the viscount nor engaged in viscount maintenance of any kind since 6 september 2009.

my physical activities since 6 september 2009 have been confined to two massages, a single 110-block walk, and the consumption of copious baked goods.

i am presently sleeping approximately 4 hours a night and am fueled by two liters of diet mountain dew a day.

the obvious response to this state of general physical deterioration being to rise early and ride a bike. because, well, yeah.

and so ride a bike i did. up orchard, down diversy, up clark to belmont, down clybourn, over on division, back up halsted, and over to north lincoln.

and i can honestly say i have never felt closer to death, God and my thigh muscles than i did at 5:49 this morning, as the sun peeked over the dome of st. clement's, and the viscount and i wound our weary way home.

Email ThisBlogThis!Share to TwitterShare to FacebookShare to Pinterest
filed under: cycoline

you biked on... Halsted?

That is the pot-holiest, traffic swollen, crazy people riddled street in Chicago.

Also, bravo. Biking is rad. I have to bike tomorrow in the rain since SOMEONE is borrowing the jeepie-jeepie to drive to the swamps (of Louisiana).

really? i find north to be infinitely scarier than halsted, but for precisely those reasons. admittedly, halsted isn't so people riddled at 5 a.m.

tell croftie to give my regard to the swamps of indiana. which are nothing like louisiana's.

this picture both makes me laugh and scares me. and I am a boobie person..

no wonder you so skinny: 4 hours of sleep per night (i'm a night person too), 2 liters of mountain dews (that would kill me), and baked goods (that i don't mind). love the pic! nice body :)

yes, this portrait is very true to life. i find that when in doubt, biking in a leotard is always the way to go.

I don't know...I commute up to Evanston and Clark north of Devon is a shitshow. It's like biking on the moon, if the moon were populated by scads of insane blind meercats on speed

My bike's name is Puck. The bike that got stolen last year was Bill Haverchuck and I miss him a lot. Especially when I'm biking on potholey streets.

but, honey, you are biking to evanston. that is like a whole other country.

and puck as in ummm... david "puck" rainey from the real world, san francisco, who was a bike messenger? please please say yes. it will restore my faith in humanity.