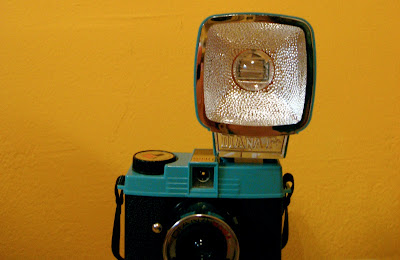 way back in january, i bought a diana. because, in my continuing half-assed dabblings in various arts, this seemed like the most half-assed, madcap way to go.

the diana is a toy camera. meaning it's cheaply made, yields photographs of unreliable quality, and is shamefully overpriced for what it is. and it's pretty.

i should point out that, for a variety of reasons, the diana is also scary as hell.

it shoots 35mm. as in actual real live film, which i haven't dealt with since 2004. AND it's entirely manual, offering a level of control i've feared since the day in october 1998, when S and i went traipsing about the franklin square and, fumbling through a film jam, i dropped my father's leica on the concrete, shattering the lens.

additionally- because when i do things, i do them whole-hog- my diana is a mini and, thus, it is freakishly small. for reference, the HUGE flash in the photo above is a mere 3". she's perfectly proportioned for a fumbling date with concrete.

and so, in the moment of half-assed madcappery in january when i bought the diana, i also defied my father, the photographer- a purist who deemed my diana little more than "a piece of crap." this was in january, mind you.

last night, may 13th, i finally opened the box.

at which time, i read the instruction manual (twice), loaded the film properly (we hope), took one picture and put the diana away.

because though, through a weekend of photographing every random stupid thing, i will master her- today the diana is scary as hell.

oh but they are.

I almost bought the Diana too!

Do not be afraid. Diana is your friend.