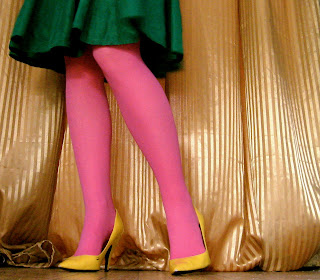 i have these yellow shoes. you know them. they've come up before.

these yellow shoes were bought a break-up and a half ago when, during an ill-advised/croftie-condoned trip to nine west in the midst of a particularly ruinous sale, i engaged in a lamentative retail spree.

i vividly remember holding them up for croftie's inspection- the spark in her eye, the crinkling of the tissue paper, the nod of her head and my own vast ignorance of sartorial sociology at that time.

we were so young then. little did we know...

there should be more scholarship on the shoes women purchase in times of emotional duress. i would argue it speaks volumes.

every shoe i've bought in the last year has sported a 3"+ heel. (what better way to rise from something so flattening?)

similarly, the yellow shoes are short-heeled, pointed, flashy and fantastically constricting. much like the dead relationship that birthed them.

i have never been a girl who puts up with pain for fashion. indignities and indecencies, yes. undergarment malfunctions? always. but pain, never.

except for the yellow shoes.

the yellow shoes break all my rules.

if de sade dabbled in women's footwear, these were the fruits of his labor.

but how to explain the exquisite pain?

were i to set my feet on fire, tightly encase them in gasoline soaked linens, light them again, douse them with nail polish remover, dip them in a vat of sequins, light them one last time and slowly remove each melted shard of glitter from my wounds with a butter knife before submerging my feet entirely in a tub of salted lava this would perhaps approximate 1/11th of the pain created when sitting down in the yellow shoes.

i repeat: SITTING. DOWN.

the yellow shoes and i have been together for four years. in three years, we will have a common-law marriage, an alarming level of commitment for something i have repeatedly tried to be rid of.

alas, no. for the yellow shoes are a clingy bitch.

my futile attempts at desertion have led to nothing but a series of spectacular fails. most notably, a charity donation attempt wherein i returned home from a long work day, naively blasting girl power songs and imagining myself literally footloose and fancy-free, only to find my donation gone and the yellow shoes waiting patiently on my stoop like a defiant, disappointed lover.

even the white elephant thrift store workers had discerned that they were of the devil.

my feet quaked in their comfy boots.

please do remember, i am the girl who's killed couches. with a saw. i am not easily intimidated by imposing things. so what the hell? shoes should not be so difficult.

but the yellow shoes and i, we are apparently meant to be and to this i am trying to reconcile myself.

so every spring along comes a morning, a cinematically gorgeous spring morning, when- presumably drunk on pollen- i think the yellow shoes the best idea in the world.

because they really are very pretty. and yellow. and yellow is my favorite. and when you look at them from afar it's almost possible- when you squint really really hard without glasses and focus on the heel rather than the torture device that is the pointy toe- it is possible to think that they're worth it.

worth the pain. the agony. the sensation that some prickled beast is being exorcised from within the arches of one's feet.

so on these certain mornings- these sweeping, epically sunny spring mornings- i give in to the power of the yellow shoes. and in the midst of hurting the kind of hurt that could only ever exist in the deepest depths of a hell beyond hell, i could almost swear the world sparkles a bit harder. that these incandescently sweet, bright blue mornings show up for the yellow shoes.

because there are terribly, terribly important things that are non-negotiable for girls in the city. there are baked goods and there are bright mornings and, perhaps most importantly, there are shoes. be they yellow or otherwise, there are always, always shoes.

at least you didn't make a Yell Ow! pun.

Nor did I actually. Crap, where's the delete post button...

so what you're saying is that i sat around and put much deliberate thought into finding a title that wasn't "the yellow shoes" and the best i could come up with was a french translation of an obscure u2 song, when all along "yell ow" was an option? damn.

well, an obscure u2 reference would have and did sail about 140 feet wide right of my head.

puns are where the action is. (no they are not).

yeah, someday you and me and the box of u2 records are going to have to sit down and have a talk.

and your magnetic fields don't?

There'll be time enough for talk in the nursing home/
Darling, time enough to write an epic poem/
But tonight I think I'd rather just go dancing...

and is that an actual photograph? because then we have far more to comment on, such as pink tights and gold backdrop..

um... yes. those are my actual legs, my actual pink tights, and the actual dreaded yellow shoes.