3 heaven in a bowl

being from the south, i subscribe to that uniquely southern belief that no event- real or contrived- can be truly observed without the consumption of tremendous quantities of outrageously delicious, horridly unhealthy foods.

and of all of my dear friendships (with the possible exception of partner) the one i have with KBG is probably the most dominated by food. we are the girls who went straight from the three sides meatloaf platter lunch at cracker barrell to inhale corn dogs, french fries, cotton candy and funnel cake at the NC state fair.

food has been a cornerstone of our relationship since KBG brought me that first croissant in holocaust class, but i don't think it really took off until heaven in a bowl.

imagine this, if you will:

KBG is coming in may. we have been excited pretty much since october 1 and it would be disingenuous not to admit that part of that excitement revolves around the promise of heaven in a bowl. because we have not had heaven in a bowl in an obscenely long long time.

to the extent, that i sometimes find myself fantasizing about it. and it was during one such fantasy the other afternoon that, like a vision from the hand of God Himself, i saw the one thing that was missing.

it's probably time to invest in bigger bowls... 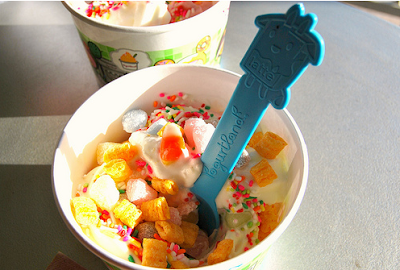 Email ThisBlogThis!Share to TwitterShare to FacebookShare to Pinterest
filed under: "cooking" in the city, the continuing adventures with kara beautiful gold

that picture is killing me. absolutely KILLING me. somehow i thought if i wrote about heaven in a bowl it would somehow give me the strength to survive months more without it. sadly, that was not the case.