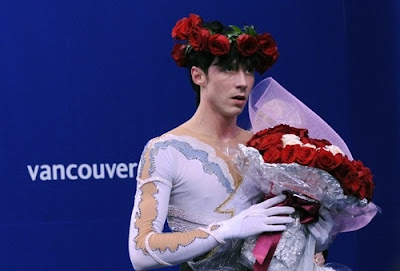 Email ThisBlogThis!Share to TwitterShare to FacebookShare to Pinterest
filed under: the cutting edge

That said, have you seen his reality show yet???

but i LOVE this picture. it's so perfect. and i haven't seen it yet. a wrong i will correct soon enough.

oh elvis. such an ass.

is just me, or does anyone else sense him having tonya harding moment in his future? it's just hard to tell who his kerrigan will be.

are we talking elvis or johnny? elvis i could totally see. johnny would probably just sprinkle pixie dust on evan lysacek and call it a day.

I don't know why Elvis went into figure skating instead of hockey. If it were all about jumps people wouldn't pay $80 a pop to see this:
http://www.youtube.com/watch?v=da8HEwnKBu8

No quads in there... And Kurt is still one of the most popular pro skaters today. I never see Elvis on Stars on Ice.

They say people can generally split into two groups: cat or dog people. In Canada, you are either a Kurt or Elvis people.

Love Johnny Weir. I don't think he'll pull a Tonya. He doesn't care enough. As long as he is invited to runway shows he's a happy woman.

Thank you for listening to my figure skating rant. I'm obsessed.

i can see we will have A LOT to talk about when you come to town.