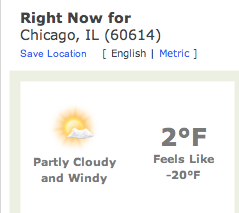 I am so, so sorry. I did the temperature conversion to celcius and learned that Chicago IS actually cold. I confess I never truly believed you. I feel your pain.

I used the converter a 2nd time and discovered it was -41 farhenheit when I left for my walk to work this morning. Yes. -41. I am not trying to top your story, though. I swear. What does this tell you? I am insane. Bloody insane. Why am I here? There are no single men, everyone is obsessed with football, and it's colder than a witch's tit.

This has to stop. Soon.

i wondered when you started planning a trip here in january in order to escape the great cold if perhaps you didn't comprehend that it is actually quite cold here as well.

and you can't believe i like zac efron in a "wow, oline, i can't believe you're so cool" kind of way or in a "gosh, what a lame" way? i need to know the tone in which that comment was written.

Oh no. I don't think it's lame that you like Zac. He's a cute lad alright. I am genuinely surprised. I thought you might be more of a Johnny Depp kind of person for some reason. I don't know why. He's a bit rougher around the edges.

i would like to return to the days before i knew who miley cyrus was. that would be nice.