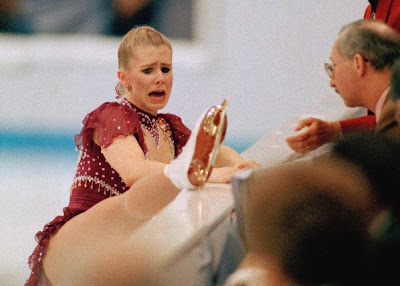 i've always been fairly certain that were i ever to have pursued a figure skating career as a young lass, i would have been highly successful. my career in socked-feet-on-carpet-skating alone should be proof enough. i mean, i broke a wrist and sprained an ankle. if that didn't forebode olympic glory, i don't know what does. but i only ever skated on actual ice maybe three or four times, if even that, and it's hard to achieve olympian level athleticism in ice skating when one so seldom skates on ice.

Katie I and i (and let's pause briefly to marvel at what a whole entire world of awesome fun that is to say) have talked about skating together for years. and i think we're finally ready. she owns her skates. i'm buying mine. at long last we're going to embrace our destiny and take to the ice. at which time i fully expect to fall flat on my face within minutes and finally confront the fact that i was, in fact, never meant to be a figure skater. not then, not now, not ever. and i'm ok with that. because put some michael bolton on your boombox and give me a pair of socks, and i'll tear up the carpet with single salchows. i suspect there are few girls who can brag about that.
by oline

Email ThisBlogThis!Share to TwitterShare to FacebookShare to Pinterest
filed under: the cutting edge

Should you maybe start with rental skates? At least until you fully embrace your inner Brian Boitano.

oh i think my inner brian boitano was embraced long long ago.

They do show it. Mom watches it. I watch it randomly but ever since Michelle Kwan retired, nobody has just captured my heart.

Can I go take a nap now?

see, tara lipinski did it for me. i have very little interest in the accomplishments of the young. excepting zac efron, but of course.

I hated Tara Lapinski. She was the Dollar Store knock-off of Michelle Kwan.