2 küchen, küchen, every where 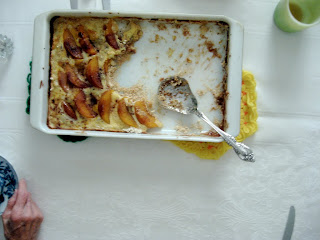 in the midst of the great saltless thanksgiving of 2009, from amongst the onslaught of sugary goodnesses a new family favorite emerged. küchen. as we sat around the breakfast table in our jammies, the conversation kept returning to variations of oh dear me, what an exotic delicacy! what a rare, rare thing, this küchen!

but in the way that things have of tending to crop up at every turn once you are acquainted with them, i've come to realize that küchen is, in fact, maybe not so rare. given the frequency with which it has appeared in the past eight days, i might even hazard to say it's downright common.

the last three books i've read have featured prominent climactic scenes wherein the characters have consumed küchen. yesterday, i saw a guy walking down the street carrying on a one-sided telephonic fight in excessively loud italian while periodically spooning bites from a perilously balanced bowl of küchen. tomorrow, croftie and i are christkindlmarketing. i dare say there will be küchen.

what this means i'm not entirely sure but i think it must be one of two things: 1) we have all unconsciously fallen victim to a seasonal germanophilia, or 2) küchen is going to be the vegetable of the year.

I am a firm advocate for kuchen, cake, or anything remotely related to be a vegetable!!!

(for the non-city rubes, however, will you share the difference between kuchen and cake??)

according to wikipedia, it is simply the german word for cake. but, based on my limited kuchen experiences, i'd say the germans have a much more cobbler-view of cake than we do.