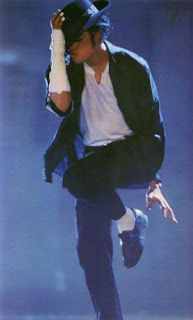 in 1993, josh poteet was quite possibly the coolest kid in page middle school, if not the world. at the time, i wasn't aware of having a crush on him. i was all consumed with unexpressed love for tony cromier (pretty much because how elegant does the name "caroline cromier" sound?) but looking back now, i think maybe i was a little in love with josh poteet as well. in that way that middle school girls can be in love with eleven boys at once.

because josh poteet was hot. an undeveloped yet dangerous, skinny sixth grade boy type of hot. he had a cowlick. he wore white button-downs and black pants. and he had a michael jackson impersonation.

a white button-down and pop music. this is all a girl needs.

josh poteet was semi-famous school-wide for this michael jackson impersonation. we're talking winter of 1993, so michael jackson was everywhere. he'd not yet been accused of molesting little boys. he'd just married lisa marie. their joint barbara walters interview was so significant that josh poteet brought in a VHS that we watched in mr. adams' history class as an example of "seeing history unfold."

josh poteet. the page middle school talent show seemed to have been invented just for him.

we're talking about a school that was literally situated between two cow farms. for a month out of every year, the whole place smelled like manure. it was a setting in which a michael jackson impersonation seemed the height of glamor and we reacted accordingly.

every year of those three years, when talent show time rolled around, josh poteet's performance was held to the last, presumably so he wouldn't shame the other acts. when the lights were dimmed and "beat it" came pounding over a sound-system so out-dated it seemed the music was thrashing inside to fight its way out, we cheered for josh poteet as though this were a once-in-a-lifetime sight rather than a spectacle we were treated to whenever a teacher finished early in class and had nothing else with which to fill the time.

i often wonder what happened to him. he seemed awfully big for a school so small. is he married? is he gay? has he gone on to do great things or did he peak at page middle?

but mostly i wonder if he remembers those days-- those moments, innocent in their showiness, that have flickered through my mind every time i've seen anything to do with michael jackson ever since-- when a boy with a cowlick moonwalked across the cougar painted on the polished floor, reveling in being someone he wasn't as 250 preteens cheered for him in a darkened gym as if he were the real thing.

Email ThisBlogThis!Share to TwitterShare to FacebookShare to Pinterest
filed under: retro, THE SUMMER OF DEATH

How I have forgotten the PMS talent show? I honestly have no recollection of it.

I do remember though when he broke his arm in sixth grade and Mr. Adams' asked him how he broke it. Josh said he was trying to do an axle on rollerblades and didn't land on his feet.

Ahh, Josh Poteete. I do wonder what he is up to...

Oh, BTW on old Page people news... Derrick is out of prison as of about two months ago.

I remember that day!!!

who was in prison now?

Linda--Derrick W has been in prison since freshman year of college. He was on Spring Break and he was drunk and driving a friend to the hospital. Well, on the drive, he ran over and killed a kid. Florida convicted him and sent him to prison for 10 years. So, he just got out around May or April.