10 it's cold and boring so, for lack of anything better to do, let's bask in the warm glow of chuck bass 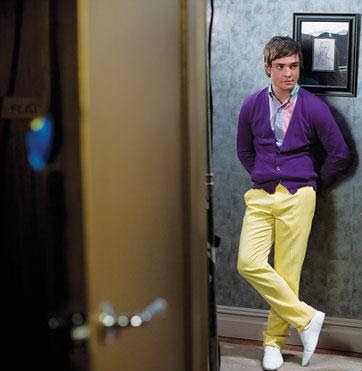 are the young douche-bag kids around the country going to ditch their popped collars and all run out to buy yellow pants??

even the dread pirate dougo, who is decidedly not a douche, was talking lavender suit.

wow. who knew you were such a style bigot when it came to yellow pants...

Update!
L and I have finished episode 2.

My theory? That the 'pilot' and episode 2 were once a single piece, and that things got too long for a one hour program so they cracked it in half, sort of clumsily.

Evidence? Episode 2 had only about 25 minutes of new material. There was the drawn out opening that caught us up on what we already knew, and then a long 'look at what we gone and did' slo-mo excess at the end that didn't really need to be there.

That said I'm fairly securely hooked. Not sure about L. She could take it or leave it I think.

Also my favorite character (so far) is the brunette. She's got sass. And I'm apparently a teenage girl.

as i said during the cup/bowl dinner, you have to stick with it until "victor/victrola" on disc 2. i wasn't a believer until then but that is where things become all kinds of effed up awesome.

and blair is my hero. i can't begin to fathom how anyone could be such a bitch and still be so likeable.

chuck bass sounds like a type of hipster shoe line.