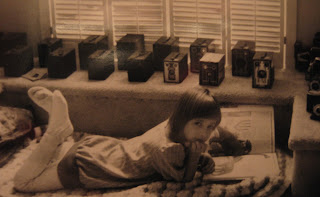 i grew up in a house of fourteen hundred leicas. we had no home movies.

thus, my wonder years can be recapped in the neon glare of full-color, the forgiving softness of black and white and the nostalgic glow of the kodak carousel.

photographically, it comes off as a time impossibly silent and still.

because we never had a video camera when i was a kid, to me, home movies are a bold and marvelous thing. i attribute to them way more glamor and power than they deserve.

there is only one eaton family film. arthur's puppies. it is, unsurprisingly, about arthur's puppies, which were born when i was in the 4th grade. subsequently, a neighbor came and shot footage of them at 4 and 8 weeks. my parents found this tape the other day and gushed on about how wonderful it was to see and how young everyone looked, especially the dog- who has been frozen in our minds as an arthritic, enfeebled ghost of what he once was.

i vividly remember this tape. and i know full well it would be acutely embarrassing to watch this tape now.

because there is no glamor here, as little girloline sits on the kitchen floor in a beaded fuscia sweatsuit, trying not to make eye-contact with the camera while obviously, painfully, attempting to steal the show, her voice shrill with need.

that is not me! i am impossibly silent and still!

video is not my medium and yet, it strikes me as something magical. or, at the very least, something capable of capturing a magic that defies photography. i have pictures, boxes and boxes of pictures, but pictures have no depth.

by which i don't mean i want to steal that particular tape or relive childhood or recreate it or videotape everything i do. i just want concrete proof- a record, if you will- of those hushed moments of childhood when we were all unconditionally loved.

as everyone gets older, i find i want that more and more.

those moments when grandma ruth's laugh filled up an otherwise silent room. when my father realized he could never sneak up on me because his popping toes gave him away. when i caught my first fish, my grandfather's face. when my mum swept my sweaty hair from my napping sweaty forehead while she gossiped with my gran on the patio, her jelly-shoed foot lazily grazing over the collie asleep beside her chair.

i want to hear the sound of the cicadas, the crunch of the plastic in her shoe, the soft brush of her foot on fur, the crackle of the ice cubes giving way under the mid-june memphis heat, the sizzle of the citronella candle, and the gentle tsk-tsk of the folded up commercial appeal my grandmother had fashioned into a make-shift fan.

these moments are small and insignificant and they're things no one probably ever would've thought to film, but i want them nonetheless. because, as they begin to disappear, i want concrete proof- the sound of a laugh, the pop of a joint- that these people once existed as i remember them. that they were once as young and vibrant as we are now.
by oline

Email ThisBlogThis!Share to TwitterShare to FacebookShare to Pinterest
filed under: arthur, eF, photographie, the family forward

now that I think about it, I'm pretty sure I have seen an eaton family home movie. must have been the collies.

see, it was so awful you blocked it out.

i dunno. I sort of like the amorphous beauty of actual human memories as opposed to technological reproductions. For me, the most powerful things in my past can only exist in the shuttered and wildly inexact file-cabinets of my brain.

I think if i were to have one of those "harry potter penseive" moments where I get to dive into an old moment of my past I would simultaneously disappointed by what I have failed to remember and by what I misremembered that never was.

As it stands there is a lot of wonder and magic in my memories, and yes, some of that is based on concrete details, your cicadas and crackling toes. But a whole lot of it is emotional, and there's not a camera invented that could explain to you what 8 year-old dougO feels like.

i think this is partly to do with being an only child. when i hit old age, there's not going to be anyone to sit around with and go oh, remember when the can of beans fell out of the kitchen cabinet into father's cereal and mother smacked him in the head with the cabinet in her selfish attempt to avoid the splash and it was the most hilarious thing ever. but then, maybe this is me glamourizing bothers and sisters as well as vhs.

I'm with the Dread Pirate, photos can't capture that emotional tinge and oftentimes they can help kill it. When I got back from Japan (and was grossly unemployed) I spent a lot of time going through my photos. But then I had to stop b/c when I'd remember an event, I'd just see the image in the photo: cold, dead, pulled out of time. The movement, color, and emotion was gone. Sure, the photograph is more realistic and we all misremember things, but maybe that's the point. Or rather, to misremember is human. So, photographs are great as art and journalism and as memory triggers. But I think those (probably fictional) tribes that thought photographs steal souls were on to something. They don't steal your soul, but they often steal the soul of the moment they record.