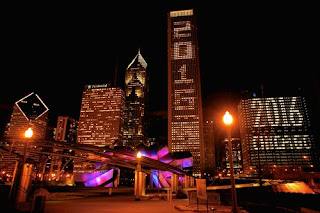 2016 is far, far away. 7 whole years to be exact. and heaven knows where we'll be in 7 years. 7 years ago i was in mississippi. i'd never been here. 7 years from now, i could be in nebraska. or dubrovnik. or kalamazoo.

but for the moment i am in chicago. and as someone in chicago, i've been somewhat captivated by the whole olympic candidate city process.

i didn't realize this had climbed into the territory of obsession until lunch today- when i clapped my hands in joy at the prospect of the bid book's release and croftie shot me the eybrows of are you on drugs?

this is all rather out of character.

i don't particularly like the summer olympics. they're all sweaty and sunburned and everyone's running about publically in garments that are little more than generous underwear. to me, the summer olympics always seemed oddly devoid of real sports like figure skating and hockey- a poor shabby sister of the glorious WINTER OLYMPIC GAMES.

my interest in chicago 2016 is probably a little mercinary. if i'm still here in 7 years and the olympics are too, the killing to be made by prostituting la petite maison de ohlighn is tantilizing to say the least.

but there's more than that. i love chicago. it is my city. it is my home. and i cannot begin to bear the idea that after years of flirtation, of flaunting its best assets, of being on its best behaviour and prettying up, my city could be found wanting by a committee ostensibly representing the whole entire world.

the whole world could be just not that into us. and that's just mean.

I like gymnastics... But that is about all I have for the summer olympics.

if the whole world is just no that into you, it needs to be honest up front. and not just keep you around as its "backup".

i have a hard time believing my wife has that expressive of eyebrows.

and for the record chicago is now ranked 4th out of 4. stupid tokyo.

shouldn't your scorn be equally directed toward mardrid and rio?

actually, i'd be ok with madrid. they've lobbied hard. they were beaten by london for 2012. and their bid book had all kinds of cutsie-pie drawings that made them seem like a bunch of high schoolers desperate to nail the hot guy after the prom. and that's admireable.

but rio? they're whole bid is based on the fact that there's never been an olympic games in south america. which is like saying, sleep with us! no one else has!

Tokyo's also gone all-out for it (in ways I cannot legally divulge), though as they've had it before I think it should go elsewhere. Honestly, it seems like CTA is a big problem for Chicago, though I can't imagine Rio has better. I won't mind losing to Madrid or Tokyo, but Rio?!

oline and madrid sitting in a tree,
k i s s i n g,
first comes love,
then comes marriage,
then comes the 2016 Summer Olympics in a baby carriage...