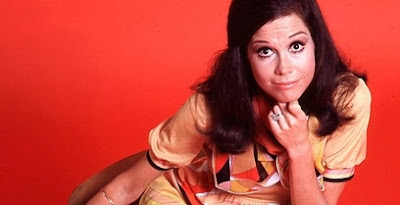 we broke up, you and i. and i reconciled my poor, sad self to the idea that you, mr. 20th century fox, will always let me down. because at heart you are a wicked, dirty, rotten douche.

you never come through. you never live up to your promises. despite numerous press releases to the contrary, i have come to realize that you will never ever in my lifetime release the remaining seasons of the mary tyler moore show (the greatest sitcom ever made) on dvd. a simple fact that makes it entirely your fault that i will be forever reduced to a life in small spaces further cramped by crates of mtm vhs. never mind that i no longer possess a working vcr.

that may strike you as foolish, mr. 20th century fox. that i would cling to tapes i can no longer play just because i taped fucking baseball games over classic tv (not once. twice.) and am determined to guard my remaining home video systems lest the same fate befall me again.

you probably don’t need a vcr. hell, you probably burned all 172 episodes to dvd long long ago and have been secretly holed up in your home theater these past bazillion years watching chuckles bite the dust in hi-def. sick bastard.

and now you’ve gone and done it. you’ve announced that you will be releasing the mary tyler moore show. ALL SEVEN SEASONS. the COMPLETE show. as a BOXED SET. in MAY. 2009.

i’m quite sure everyone in my social circle just heaved a huge sigh of relief upon reading that, as they are all Sick To Death of my “20th century fox is a fucking bastard because he will not release the mary tyler moore show (the Greatest Show Ever Made) on dvd” sermon. a sermon i have been preaching for the last 5 years.

to put that in perspective, mr. 20th century fox, my friends who had weddings five years ago have built successful marriages and are having babies. i have spent those years waiting on a dvd boxed set.

five years i have wasted waiting on you. and now you say it’ll all be over in a mere 3 months.

so what are we to make of this? i’m no idiot, mr. 20th century fox. i’ve wizened in these harsh, mary tyler mooreless times. i know your commitment issues in and out and i refuse to believe you. because you are not a teller of truths. you are a bad, bad man.

remember the spring 2003 release of season 2? yeah, that didn’t happen. or the “going forward we will be releasing the seasons on a 6 month schedule” press release of December 2005? totally didn’t come true. and what about the printed insert (IT’S ON PAPER! IT HAS TO BE REAL!) in the season 4 dvd announcing season 5? nope.

honey, you lied. and a girl doesn’t forget.

so now you have put forth the tantalizing idea that my years long quest at dvd seasonal completion could come to an end.

mary in may? ha. i’ll believe it when i see it.

what I want to know is how you keep hearing from 20th century fox. did you sign up for their press releases or something?

i signed up for emails from a collective of people lobbying fox to get mary tyler moore to dvd.

here I only get emails from Barack Obama. and david plouffe. and Joe Biden. and Michelle. and...

howard dean and mitch stewart and...

Of course, I also own the entire series of "Wonder Woman" on DVD (which got released in a span of like a year).

planned parenthood wrote you, pirate? they must've been eavesdropping one aisle over when croftie dropped The Great Walgreen's Baby Bomb of January 2009.

are we going to see oline on the news someday? in a picket line, outside the 20th century fox building?

i would very much hope there would be an intervention before we got to that point.

I'm just putting this out there.... the parentdears have a machine that converts vhs to dvd. to tide you over.

oh, tempting as that may be, even i realize that requesting the conversion of 35 video tapes to dvd exceeds the bounds of our friendship. we would've had to have dated and had the sex and maybe even been married for a couple years for vhs/dvd conversion to be in play.