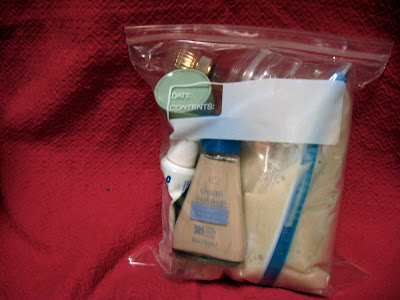 Yeah, good luck with that.

You remember the story of me with the Germans and my hair dryer, don't you?

The Germans didn't want to let me through with my hairdryer in my carry-on. They thought it was an explosive device.

It was a huge ordeal. I hate flying in and out of Germany.

I think it went... a little something like this:

Close-up on the conveyor belt where passengers place their stuff to be x-rayed. random bleeps and bloops. We pan back and see a long line of folks walking in their stocking feet through the metal detector. One of them inexplicably resembles Jeremy Piven but that's not important. Everything seems fine until the conveyor freezes.

TSA sees something it doesn't like. Everyone is halted, nobody is going through anymore. A pair of comely blond Germans named Gunter and Garbledina dressed entirely in squeaky black leather haven't passed through yet and start to sweat and act suspicious.

But it's Meggie's suitcase that is causing the problem. Specifically her hair-dryer which is positioned in such away, with the things around it, to look like an enormous .357 Magnum revolver.

Time passes interminably slowly as TSA proceeds with caution. The camera passes slowly over the crowd revealing a fat young child in line begins to cry, a sound closely mimicking a dying spotted hyena. A large Hispanic man begins to beat-box. A pair of sorority girls in their pajamas stop snapping their watermelon bubble gum and commence making out. All of this completely unnerves Garbledina who, left eye twitching, reaches into her carry-on and pulls out a real handgun and howls with rage. Gunter does the same and the Germans stand back to back like in the movies. Passengers scramble away in every direction and TSA guards draw their weapons.

Then Meggie calmly grabs her bag which has finally passed through security, cracks it open, pulls out the hair-dryer which is merely a case that conceals a real Magnum.

"Hold it right there you German assholes!," Meggie says pointing the cannon menacingly in their direction. in the face of such artillery the blonds throw down their weapons and the TSA come over and handcuff them to one of those mobile carts that speed through the terminal ferrying bespectacled grandmas to the bathroom.

TSA gives Meggie the their Medal of Glory, a wrought iron disk as big as a sewer-cap with bands of red white and blue Christmas lights along the edges blinking "America Fucking Rules" in a strobing morse code. Everybody cheers and America is safe forever and ever.

Well, that is a better story than I could ever come up with.

I did learn one important thing in the real version... If they think your hair dryer is an explosive device, the LAST thing you should say to the freaked out Germans is, "You want it, you can keep it." 'Cause then they are wondering why you are trying to give them the hairdryer.

to be fair, i wrote my post before i read your actual story, otherwise i would have incorporated the real events into the plot-line. I'm all about verisimilitude. In fact, that will probably be written on my tombstone:

In Boston they confiscated a jar of peanut-butter and a jar of fluff from me. They said they were liquids. Do any of you drink peanut butter or fluff?

Did you and your festering yeast make it safely to your romantic getaway?

Did you know little Peters is getting married to Sarah from Norway?

Anyway, I hope your bread fantasy worked out, and thanks for the pretty link to my shop!