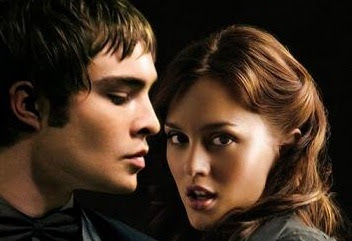 so we need to talk about gossip girl. (i'm going to assume that all of my friends are as cultured and with it as me and likewise cling to the television set every monday night between the hours of 7 and 8 cst.)

last night's gg taught us many, many things. among them- that blair's boobs can best blake lively's. that alongside the on-going Ed Westwick Sir Laurence Olivier-esque Acting Extravaganza, all those other upper eastsiders appear to be rehearsing lines for a senior play. and that lily and rufus have learned nothing about the importance of abstinence (oooooh, the birth parents of our secret love child won't let us meet him. let's fuck.)

but overall, i think from these 39 minutes we can glean three fundamental caveats:

(1) never have a secret love child. not because it will destroy your marriage and indirectly kill your husband and send your pissed off step-son into a downward spiral that climaxes with him nearly tipping off a building and ending his life. and not because secrets are bad. no. never have a secret love child because despite living in a city of a kabazillion people, your future (non-secret) child will inevitably wind up dating the future (non-secret) child of the person with whom you had the secret love child and the revelation of the existence of your secret love child will create a huge big 17-minute existential conundrum of omg. we can't date now because it's all icky!

(2) never accept the gift of prostitutes from an uncle. it is but a clever ruse intended to reveal your clumsy inability to strip said prostitutes down past their underwear (are we seriously supposed to believe chuck bass would stop there?) and expose you to an unknown morality clause in your recently deceased father's will, thus preventing you from assuming your 60% claim in the family business and diverting the subsequent world domination to the clutches of your evil uncle, who did something- no doubt dirty, disgusting, and very very vile- to your girlfriend (sidekick? lover? wench?) on new year's eve.

(3) flowers do not solve everything. though a girl will perform in a speakeasy, surrender her virginity in the back of a limo, endure comparison to a horse ridden hard and put away wet, and rescue you from an 18th century opiate den, say the wrong thing and flowers (even when combined with slapping the elevator door like it's your little bitch) cannot make it better.

if this was an attempt to undermine my cultural authority and withitness, bah i say (in my most dread pirate voice).

So... you can't date a step-half-sister? I'm pretty sure there are Mongolian yak herders that I'm more closely related to than a step-half-sibling.

I should also note that I've never seen the show, so I could be misreading the bizarre spawning dynamics at play here.

it actually goes further. you cannot date someone who is in no way related to you but with whom you share a half-sibling.

"GIVE ME BACK MY STEP-SIBLING WIFE AND DAUGHTER!"

we were watching that on Sunday I meant to add. We're still stuck in 2003.

It's getting out of control and I love it so much. I would have taken those flowers from Chuck in a heart beat. He's such a fixer-upper.

I don't think I could make it in life without guidance from gg.

I wonder how Dan and Serena feel now that they are essentially extras?

You know the 6 principal characters signed on for 6 years (s, d, b, c, n & ? - would the 6th be J or V?), which means at least 4 more years of drama. It's hard to imagine many more twists and turns. Well there is the secret love child who is not really dead even though his adoptive parents say he is, him and S (or even d) could fall in love, that would be another twist.

I predict they all go to Yale after graduating and continue teaching us the ways of the world. If we're lucky.

The CW network is expanding the universe of “Gossip Girl,” the low-rated but much-buzzed-about drama. An episode in May will take the form of a prequel, laying the groundwork for a spinoff that could make its debut as soon as the fall, the network said. The episode will chronicle the exploits of Lily Rhodes, whom CW calls a “wild child teenager in Los Angeles in the 1980s.” Lily grows up to be Lily van der Woodsen (Kelly Rutherford, above), the mother of Serena in “Gossip Girl,” which chronicles the present-day lives of ridiculously wealthy teenagers in Manhattan. Also this week, CBS confirmed that a spinoff of the criminal drama “NCIS” is in development.