1 putting the piano down 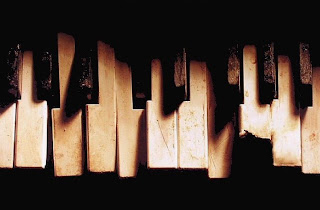 i'm a big fan of euthanasia. i should qualify that. it does not mean i am consistently hovering over hospital beds with cyanide-laced bryer's slow churned. just that when something is clearly going to die, i think, in most instances, (particularly with important things like pets and fashions) it is inhumane not to make that process a teeny bit easier. to turn off the machines. to stop the pain.

in 1963, my grandfather paid $149.50 for what has become Our Family Piano. it's an old upright. a reformed player whose most notable characteristic is that every third key is chipped from the day that a now-legendary naughty neighbor boy came over and attacked our ivories with a drum stick. as in an actual drum stick- not a fried chicken leg.

so this is how i learned to play. measuring the distance and feel of the notes by the jagged razor at the end of every third key. foreign pianos always seemed so strange. pianos with all their pieces that hadn't withstood the inexplicable aggression of passing naughty 1960s youths.

there was a time when i played this old beat up thing every day. for hours. back in the days before books and boyfriends and dr. quinn, when all my love and excitement could be funneled, unadulterated, into an upright and a dog.

i swore i would be faithful. that i would never abandon what i, with horrid pretension, called "my gift."

(in addition to being in favor of assisted death, i also believe teachers should never encourage children in anything vaguely artistic. it only results in the entertainment of lofty impossibilities and belatedly mortifying pompousness.)

as a kid, i used to harangue my mother- often a mere beat after the final note of tchaikovsky in her bi-annual run-through of sleeping beauty for beginners- about how she never played the piano any more and how i was different and music was such a huge part of my life that when i grew up, you wouldn't see me not playing a piano for months and months.

i am grown up.

i have not played the piano in years and years.

that's not entirely true, but it's pretty damn close.

last weekend, in what i am certain was sheer torture to my parents, i played for the first time since july. for two hours, i slogged through the same six-page sonatina over and over again to little avail. by dinner, my father had choreographed an appropriately halting and jerky interpretive dance. trust me, it is nothing like riding a bike.

people always say you'll never look as good as you do in your twenties. no one ever said i'd never play as well as i did at seventeen.

the piano- our piano, my piano- has fallen apart. it is dying. the keys are loose, the pedals are floppy, and the sound is akin to a kazoo swallowed by a whale with its head stuck in a bucket. it has been tuned once in seven years. this is no way to live.

but how does a piano die?

instruments seem immortal. you see that violin from 1222 sold by sotheby's for millions and you never stop to think of all the violins of its graduating class that gave their lives along the way.

for years, i've fantasized a lovely reunion scene where Our Family Piano comes pulling up to my house and is plopped in the bay window of the music room and i play all the live long day, the four collies curled around the bench.

there are many impossibilities in that sentence, the greatest being that piano living to see the day that i could afford a home.

the piano has to die, but you can’t put a piano down. i've killed a sofa. i've cut up dresses into shirts. i am capable of creative thought, but here, i am stumped. i just can't.

it requires a hardness of the soul that i do not possess.

at least i didn't think i did, until croftie and i went to macy's and, thanks to our current financial crisis- which is apparently not conducive to the buying of huge, overpriced musical instruments- the basement was stuffed with pianos. one was an ivory baby grand.

now i am haunted by the thought i'll be saddled with this damn Family Piano for years and years and years. that i will never have something prettier because it will never let go. it will never die. my soul has completely, utterly hardened. but then maybe this is what growing up is. toughening up. letting go.

when Our Family Piano was last tuned, way back in 2002, my mum inquired about its fate. whether it should be internally overhauled. whether there was any hope.

the piano man, whom i always took for a romantic because he would whip out a viennese waltz at a moment's notice, reached out, ran a ginger glissando up those battered, broken keys i love and said this, when you get right down to it, i know ya love it, but let's be realistic here, it's just noise in a box.

he said that and my jaw hit the floor. but now i can’t help but think he might’ve been right. maybe it is just noise in a box. and maybe you can put a piano down.
by oline

Email ThisBlogThis!Share to TwitterShare to FacebookShare to Pinterest
filed under: shit in the city, the natural condition

Pianos are for life. And sometimes not just yours.