13 the soundbites of democracy 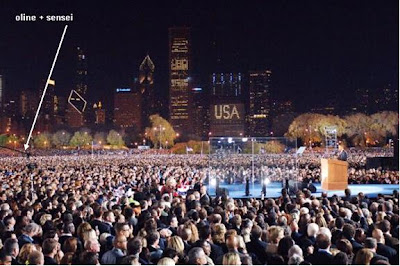 things uttered by oline, sensei and the people around them at obamanomenonapalooza

"i feel we are walking towards our doom."

"yes, i want to be footnoted in history as the person who handed a drink to the son of someone who is a total non-entity in your book."

"i'm a little less in favor of obama now i know the scary angel mime guy from the park is on his side."

"i'm not sure this is an environment where you want to evoke guy faulk's day."

"this is the line? does it have an end?"

"i think people up there are moving."
"it's the movement of democracy."

"we've been here half an hour and already we've arrived at the subject of ass nipples."

"this is the line of democracy."

"part of me almost wants sarah palin to stick around so we can have more tina fey. i wonder if this is how people felt about hitler and charlie chaplin."

"it would be so much less impactful to have been waiting in line here while history was happening right there."

"do you think they just said, 'well, we've got this building that looks like a vagina, might as well give it a clit'?"

"the portapotty of democracy. that light hits it as though it was..."
"the manger."

"i'm not all that reassured about our safety given the only security measure thus far was the water bottle confiscation squad."

"look at all those people in line for the hot cholocate of democracy."

"it feels so much more real now that they're playing springsteen."

"you can pee anywhere you want. this is the greatest night of our lives."

i giggled extra hard at the hot chocolate of democracy.

obama-menomena-palooza? nobody told me they were going to be there too!

and I'm not sure i want to know how or why the subject of ass nipples was brooked.

why michelle l'amour of course. isn't that where all ass nipples conversations begin?

michelle l'amour was there too!? The ass (of democracy) that goes pow! Dag!

she was only there conversationally. not in the flesh.

see, now I picture Sensei with a super high-tech charlie's angels watch where he can call the ATGP at any time to get her advice on a specific task at hand, the mission last night having to deal with, apparently, ass nipples.

Other people on Sensei's watch:

She truly does have the Ass That Goes Pow... for Democracy

Doug, I'd appreciate if you didn't publish publicly the roster of the Osutein-sensei Super Squad.

...and the moderately crowded yuppy bar noise superpower of democracy.

i had forgotten about Osutein's super-power! thank you.

Wow, my election night pales in comparison. Best I heard was "Oh blow me" from one Army Wife to another...

dare I ask what an ass nipple is?