11 somehow, of everything, this offends me most 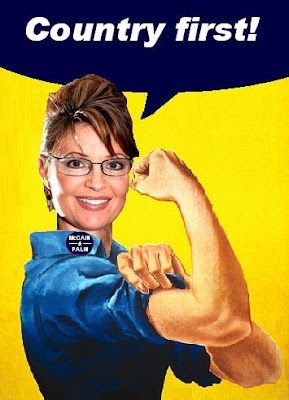 there is a reason she's polling 15% higher among men than she is with her own gender. It's because conservative established white guys know Palin puts women in their 'proper' place, a distant second behind their men. She absolutely disgusts me and should horrify every former Hil supporter.

The only thing that Palin the riveter is soldering up are those 'million cracks' in the glass ceiling.

the detail that annoys me most is that she returned to work three days after giving birth. after women lobbied for years for the FMLA and the right to stay in a hospital for a full day, she went back to work. to do that and to act as though that's a qualification revealing your great commitment to duty is beyond irresponsible and qualifies you for nothing more than a smack on the head.

2) Republican (which really should be #1 but I'm too lazy to fix the numbering).

3) Mom of special needs kid who went back to work 3 days later.

Ugh, don't even get me started on how insulting this decision of his is to American people. I hate the woman with a passion.

but, i learned today that she never actually filed to have books banned from a library. She merely inquired from a staff member on how the procedure worked, how one went about doing it, just a lot of insinuating that said staff member should help her with this and then pulled some strings got the poor woman fired for not helping her get this done.

Um, she did a lot of firing for improper reasons.

She sucks! I love when they talk about Obama's lack of experience and then pick a VP who has been govenor for 2 years of a state with one of the smallest populations in the union.

Don't even get me started now on about how she turned a going away ceremony for the soldiers into a campaign stop. That was just beyond despicable. That is a private moment with the families. It is the last time they get to see their soldier for 12-15 months. It just shows how crappy of a mother she is that she hijacked her son's going away and how shitty of a human being she is.

let's not forget the date of that going away ceremony either. 9/11. that's seems way too coincidental to be an accident.

this seems as good a time as any to beg for someone (anyone!) to go see the new oliver stone with me...

Basically, an entire battalion (400 soldiers approx) will deploy over usually 3-5 days. The brigade will deploy over a period of 2 weeks. It usually goes by when flights are available and booked a couple of weeks in advance (they fly over commercial--not military).