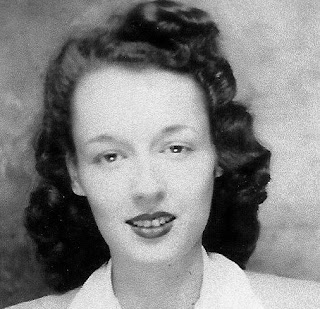 i've spent the past 9 years waiting for her to call me back.

grandma ruth. my first memories aren't so much of her but of the huge cardboard boxes she would send. boxes polluted by the cigarette smoke that hung in the air of her two-room trailer like the heat trapped in a parked car. they had to be detonated, opened and aired out on our door step. smoking cauldrons from whence homemade treasures and barbie dreamhouses would later emerge.

things like that didn't happen at gran and paw-paw's, where we ate watermelons, played croquet, and held hands when we prayed. even then, it was so obvious. grandma ruth's world was worlds away.

she was my auntie mame. loud and colorful and divorced. she had been to greece. she said things you weren't supposed to say and she said them with sweeping, dramatic hand gestures. whenever she blew into town in aqua capri pants and a blaze of marlboro smoke, life seemed more exotic. birthday cakes melted. my hair was braided. we ate chinese.

to me, she was a celebrity. except she was from binghampton, new york. binghampton. hollywood. both places so far away to my little kid mind that they might almost be neighbors. like on a flat map, how russia couldn't seem further from alaska's back yard...

i saw her maybe seven or eight times that i remember. the longest stretch being the summer before she died, when i camped out on her pull-out sofa over 4th of july, cramming on russian verbs. we went to denny's four times in two days, because in binghampton, denny's was what you did.

she had given up smoking by then and as we sat in plastic lawn chairs drinking tea, she gestured with a fake, styrofoam cigarette, waving it about for emphasis. i remember being struck by the fact that it was the first time i had really seen her. without the smoke, there was no need to squint.

then i graduated and went to college and didn't call her nearly enough and suddenly, a month later, she was gone.

which is something i have still yet to fully grasp. in my head she's up in binghampton, in the same trailer, going to denny's and smoking up a storm. how could she not be?

in drop dead gorgeous, the neighbor loretta reminds me of her and i always think, i should really call grandma ruth. i don't. but i always think it.

when i was a kid, my family had this dog. the Greatest Dog of All Time. arthur. say his name all these years later and it's like we're instantly transported to that moment where we sat on the garage steps on a dark february night and came to the unanimous family consensus that we had to let arthur die. it's pretty much just assumed now that for the rest of our lives we will be in deep mourning for that dog.

i've done a dangerous thing here. i've set up a contrast between my grandmother and a dog.

but here's the (other) thing that makes me a bad person. i didn't feel that way about grandma ruth. i tried but i didn't. for me, there was no mourning. her death lacked immediacy. probably because The Call came far before any of us had begun to prepare to expect it.

she never seemed fragile. she never fell apart. we've been locked into a who knows how many years-long deathwatch for my gran and paw-paw since 1995, but grandma ruth was tough. she could take it. she was too alive to die. and then she did.

the only time i really felt her absence was at her memorial service the following summer, and only then because i knew she would be pissed we were having a party without her.

i was in mississippi when she died, beginning one of the not greatest years of my life and already well on my way to a D in chemistry. suddenly everything was different but nothing had changed.

the raspy voice on the other end of the phone had gone silent.

my parents went to new york without me.

my mum and i have only talked about this time once. years later. at the intersection of hacks cross and poplar pike, while we waited for a train to pass, out of the blue she asked if i was ok about grandma ruth. i said yes. it seemed a little late to say no.

it's not that i didn't love her. that i don't love her still. that i don't miss her. no. it's like she isn't gone. like i said something she has yet to forgive me for and she won't call me back.

at concerts, i'll catch a whiff of marlboro smoke and turn around to look for her. as though a gogol bordello show were a likely venue for grandmotherly resurrection. (u2, maybe, but not gogol.)

waiting for graduation at the u of c, as the bagpipes started and croftie said her pithy thing, a flash of fury ran through me that my grandmother didn't even think to show up. then i remembered why she wasn't there.

she wrote me a letter the day before she died. it came the friday after.

she had the last word.
by oline

Email ThisBlogThis!Share to TwitterShare to FacebookShare to Pinterest
filed under: loss in the city, the family forward, the full-color four collie dream, the natural condition

best thing you've written on this blog. the best.

it was okay. oh who am i kidding.

(also, you know its Binghamton, right? your repetition and style make me think you were spelling it erroneously on purpose, as if Your Aunt could only live in a place suffixed by Hampton, and not a mere hamton)

(maybe that's new. maybe the whole city got together and decided to eschew the P, because my father has a grey hoodie circa 1972 that says "binghampton." or- scenario #2- maybe the board of tourism, hoodie division made a ginormous embarrassing mistake and sent all the discards to exiles in tennessee.)

By way of today's post, I'm stumbling into this one for the first time and

2) Despite the presence of a box containing his ashes on my bourbon shelf & despite the fact that I sobbed my way through his funeral, I feel exactly the same way about my brother. Why the hell hasn't he called?

(in parallel awkwardness, his daughters wrote me a thank-you note for their birthday gifts the day before he died. in them, they both said "hope to see you soon!")

ah yes. i'm always surprised that when i go to write about her (which obviously- as you'll see when i finish this sentence- isn't often) that this is pretty much the only post to link to.

and the parallel there is AMAZING. i think this is one thing that's really lost by the lack of writing actual letters. because before ruth died, my mother had mentioned that she'd told her she had written me a letter. so that whole week in between her death and my receiving it, i knew that letter was coming. which was both a burden and a relief.

I do find it appropriate that my computer programmer brother's last words to me will be forever saved in screenshot form as a comment on a fb post from that morning.