0 forgive me. i know it's tacky to cite one's self, but i have nothing new to say and yet it seems something should be said.

(and please continue to bear with me during our brief digression into kennedys in the city...) 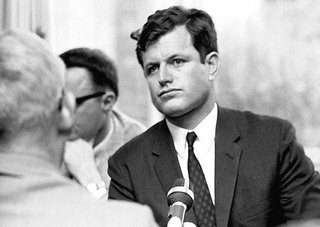 4/30/06.
there's no cable in my life, but an informant told me that teddy kennedy (wearing an incongruous bright gold godfatheresque chain bracelet) was on the daily show last week. now that he's broken into the world of late night tv, it's time we reconsider teddy. not the stern, bloated teddy of today, but teddy circa 1945-1981. charismatic, charming, carefree but troubled teddy. the teddy who knew how to party and cheated on his harvard exam. the teddy who was HOT.

Email ThisBlogThis!Share to TwitterShare to FacebookShare to Pinterest
filed under: teddys