14 you can never go down the drain 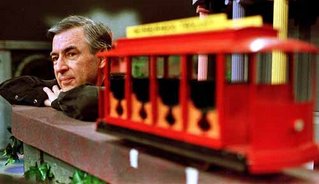 mr. rogers had this song that allayed all my childhood fears about going down the drain. because while i didn't suspect that i could go down the drain in my entirety in one big swoosh, it seemed quite logical that a rogue toe could fit through. or that a lock of the oline hair might get caught up in the swirl and suck my whole silly head down with it.

which is why it was a rather stunning twist of events last night when i actually wanted to go down the drain. because nothing was going down the drain. not me, not water, not draino, not squat.

somewhere along the way, the drain went on strike. in the aftermath, it's been like showering in a wading pool. participants in the Let's All Go See Oline Before It Gets Stoopid Ridiculous Cold Up There In That Freezy Winter Wonderland In Which She Has Chosen To Dwell-O-Rama can attest to this.

much like standing in the hull of sinking ship, one grows increasingly aware of the rising tides. by the time of conditioning, one is ankle-deep in water. stay much longer and death by dirty waters would ensue.

clearly, this is intolerable. so last night, i- a girl who abhors cleaning bathrooms, entering bathrooms, talking in bathrooms, seeing other people exit bathrooms and bathroom humor- went to war with my bathroom.

i went to war and i won. there were vigorous celebrations. the veive was tossed in the air a couple times. we donned silly hats and threw a dance party and fell into bed at half past three.

this morning, bleery-eyed from the revelries, i stumbled into the shower and nearly banged my face on those damn plants. recovered but dazed, i turned on the water. a flash flood.

my man rogers forgot to mention, the drain always wins.
by oline

Email ThisBlogThis!Share to TwitterShare to FacebookShare to Pinterest
filed under: baths + the city, bubbles, silly things

Does this call for the return of pool shoes?

quite possibly. or flippers.

Personally, I'd rather bring back a pointless item from the 90's than use a for-reals justified flipper.

i'm bringing me some stilts!

ok, lindear. you are at liberty to bring back the pointless 90s item. we can add those to the OHTAGFTEOTBU&CC line.

n, be sure to have me pay closer attention to the "how your plumbing works" exhibit at the science & industry museum. the lindears and i failed to take notes. in the meantime, stilts would be wise.

we sure did miss out on the needed info, didn't we? I think I was too fascinated with all the buttons we could push.

that thing was quite the modern marvel, which sounds absurd since it was so obviously constructed in 1952.

We ladies of the long hair have to suffer through the occassional flood. Small price to pay, really.

yeah, we got a little of thst going on at chez Pirate. Pray tell what was your secret?

i know this is terribly naive, but i like to flatter myself that i am not a hairy beast and that la petit maison de oh!-'lighn simply has a serious case of crap plumbing.

"thst," pirate?! awesome! and are you liking thst fergie i have lent you? if i recall correctly, they do come. kind of. feebly.

Bombsie, I agree with you as one who has hair almost to my waist now. It just clogs the stupid drain and there is no way around it.

Caro, here is my advice: buy the Draino or Liquid Plumber gel. Put way more than it suggests down the drain and let it set for about fifteen minutes. Add more and let that sit for about another ten minutes. And then run the hot water. It should run straight down for at least 3-4 weeks before you'll build up another clog.

And it's not that you are a hairy beast. It's 'cause we have long hair and crap plumbing.

so maybe this was not the appropriate audience for flippant hairy beast remarks!

as a shorn & short-haired lad, these problems are oh so foreign to me. oh, and that picture of mr. rogers is wonderful.