14 i may be urban, but i'll not be outfitted 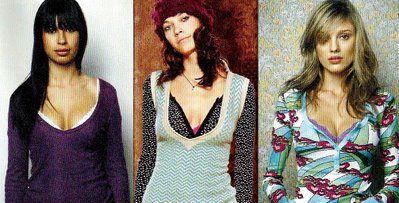 i don't like urban outfitters. a loyal h+m girl, i find urban outfitters too dark and drab. it's a dungeon by comparison. admitedly, they make some cute things. the bombsy's dream coat for one. my fabulous rug and the vieve's throne for two others. but there is no store that makes me quite so uncomfortable.

because urban outfitters so obviously thinks it's way cooler than me. there is no more judgemental retail establishment.

maybe it's because i myself am judgemental. the hordes of trixies that come from iowa and wisconsin and peoria and du paul to go to the store on our street are pretty much the same set that we referred to in high school as the "tan people"- girls who frequent tanning beds and the boys who date them. we pale people, we didn't like the tans.

i swear, the trixies/tans come to urban outfitters by the busload. they clog the street. they act as though it's an imposition if you ask them to move out of the way. it's analagous to navigating that hallway in high school. thus, i, pale to the very core, avoid that place like the plague. but some things are inescapable. urban outfitters is apparently one of them.

today, a catalogue arrived. and i thought, wow. victoria's secret has had quite the revamp, dropping the hi-gloss, 35 lb. cover and moving to 27 lb., lo-gloss stock. gutsy move, vicky.

then i realized. this was an urban outfitters catalogue. and i am left to conclude that this is the year of what lindear refers to as the bazoom.

this happens. we twiggy girls have our day and then the bombshells come back for a few seasons then it's our turn again. it's no big deal. but there's something different, something diabolical, happening in the urban outfitters catalogue.

this is not décolletage in the context of little black dresses and ballgowns or even sexy sweaters. this is red-carpet-ready breasts spilling out of $28 tee-shirts.

my new fear is that people are actually going to dress like this.

urban life is hard enough already. there's the windpant/cardigan combo in the spring, the men who roll their pants to show off entirely too much sweaty, hairy leg in june, and the women who, all through july, act as though bikini bottoms are a legitimate summer pant. stop the madness, people.

it's not that i'm averse to fashionable provocation. i am, after all, usually the most colourful person in the room and my oddly clothes have, on many an occasion, left me giving an eye-full. but seriously. it's cold. it's freezing. it's winter. don't put on two sweaters and three shirts just to fall out of it all. we're urban, yes, but these outfits, they hurt our tender souls.
by oline

Email ThisBlogThis!Share to TwitterShare to FacebookShare to Pinterest
filed under: lindear, silly things, sluts in the city

the atlanta urban outfitters is a horrible store. it's seriously in the basement of Lenox mall and is basically the biggest waste of space, ever. it's expensive to shop there, and you end up looking like someone who has no job and surfs all day... so if that's what i do all day... how am i supposed to pay $35 for the tee-shirt.

as for the pervy models... they must have adopted a less homosexual abercrombie & fitch style of advertising.

i think they're going the american apparel route, only slightly more subtle. and i know people swear by american apparel, but seriously- some of their models look like they're four days away from the free clinic.

this is why h+m rocks. because their models may weigh ten pounds and they may be wearing some preposterousnesses, but they keep it classy and their eyelinuh is always impeccable.

i'm sure even the boys for h+m even have the impeccable eyelinuh. and i've always thought the american apparel crowd looked like they've just left the free clinic.

clearly i like to use the word even, even if it isn't even necessary for it to even be there.

Um, so we don't have an Urban Outfitters yet (I just like the kooky t-shirts) but we're getting an American Apparel which disturbs me 'cause they do look like crack whores (watch them bleep that word out).

And Caro, will you be my sympathy?

LG, you were just putting the emPHASIS on your evens. and yes, even the h+m boys line their little eyes.

meggie, i will b ur 4ever and ever sympathy.

and boo to crack whores trying to hawk clothes. we don't do derelict.

it's funny how much american apparel has ended up in my closet.

it became the en vogue choice for all merch table tees because of it's "no sweat shop" creed.

but i assure you i do not do derelict. now mugatu's derelicte... that's different.

Um, Caro... Do I want to be your sympathy? I still think that it sounds vaguely dirtyish.

Oh, check out my top four. Finally got him online to add me. *laughs* And we talked about changing our status to "In a Relationship". It's sad that Myspace is dictating our relationship status. I do know that we're not in an "open" relationship however... Boys are weird.

we chicagoans are soooooooo overdue for a zoolander viewing. it offends me how long it's been.

meggie, did you not reach a conclusion?!

Nope... No conclusion reached. However, his birthday celebration has been postponed by an hour due to the Alabama-Auburn football game. Sad things is, it doesn't bug me 'cause I'd do the same thing if it was a game I was interested in!

how did you discuss it and not reach a conclusion? that would drive me mad. and why are we discussing this here and not over email? we're weird.

Um, one, yes we are weird. Two, we have discussed this further and still haven't reached a conclusion. I think it's coming though... You've got to remember Caro... I'm the one who dated a guy for two years and never DTR'd...

perhaps you're making the DTR considerably more complicated that it's supposed to be, meggie darling. this sounds like peace talks.

and have you told me about the two-years-guy? (is this the pancake man?) probably not, because you knew i would have been shouting at you to DTR through the whole of it.

maybe you should petition the myspace gods for an "undeclared" option. seems most sensible and less arbitrary than "other."

Is there an other option for relationship???? I need this!! I like other. *laughs*

Um, who is the pancake guy? Did I date a pancake guy? It was the guy that would pick me up at the dorm, take me to his place, and make me breakfast in bed. But it wasn't pancakes. And we never DTR'd 'cause if we tried, we broke up. *laughs*

And yes, my DTR is comparable to the peace talks 'cause look at who I'm dating! Oh, btw... His timetable got moved up. He's not going to Afghanistan next November. It looks like he's going back to Iraq in July. :(