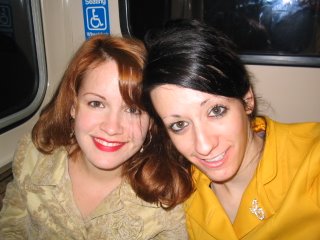 things happen in chicago. that sounds illogical because things happen elsewhere too, but things really happen here. big things. the best bands come to town twice a year, there is a seemingly endless bounty of free tickets to incredibly cool stuff, far away friends want and pay to come visit, and a random remark about a baseball team can lead to a life of sugary crime. if we were in mantachie, mississippi, somehow i think things wouldn't happen quite so much.

this is probably very much a "you had to be there," but last may, squeezed together on an afghan-covered couch and surrounded by 20-year-old hipster boys, bombsy and i watched a group of incredibly drunk, obscenely off-key guys launch into some cliched song that we can no longer remember. but what we do remember- which somehow slips our minds and resurfaces with renewed hilarity every now and again- is that one of the guys, not more than three feet opposite us and looking straight into our laughing eyes, shouted at the top of his voice to the friends flanking him: those fucking girls are laughing at us. which made us laugh even more hysterically. and, in turn, prompted him to pause for a beat and continue: those fucking girls are STILL laughing at us. if he only knew. those girls. they'll be laughing all year long.
by oline

had the pumpking been available... he'd have found his pumpkin carriage. two ladies like this clearly shouldn't be left to the train... and huzzah for the toothsome duo of sugary bonnie & clyde.

oooh ooh what remark led to a life of sugary crime??? i'm sure i've forgotten a fabulous moment here....
oh, my caroline. in the year of our bombshell 2006, the pillbox pair was present at all the most fabulous/imfamous events...that party, vertigo, the ballgame, the red carpet premier...the seder...

ha ha, bombsy. there you are in my window!

a rather striking photograph.
-SuccinctdougO

It's The Yellow Coat! The coat that spawned the Year of Yellow!!

the yellow coat is officially beyond my wildest dreams. long live the year of yellow!

indeed... from the plains of kansas. love live the yellow coat, and its wonderfully dressed owner.