8 while you can stand there, you could move on this moment 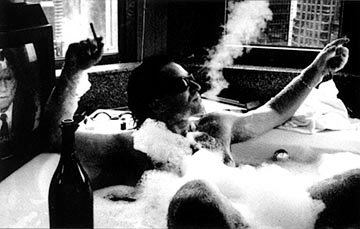 (for the bazillionth and very last time ever in this forum: i love u2. i love achtung baby the best. i love "ultraviolet" the most. so the equation of givens from here on out is U2+AB+UV=oline.)

chicago is loveliest in november. i don't know why. it just seems to have its fancies on. but late september and october aren't too shabby either. there are these beautiful, chill days- where the breezes blow through the leaves and people are still sitting outside at the cafes and the flower shops keep their doors open so the petals go skipping down the street. there's an electricity before the winter hits and the winds come and the snows fall. it feels like october 23, 1929.

it's an electricity that requires the perfect soundtrack played at appropriately deafening levels. for some reason my u2 love has very much been an indoor affair in the last few months. a whole slew of others have been taken out on the town while the lads were left at home. today, because my city was looking mighty fine, i took them out and was duly rewarded with a breakthrough.

achtung baby has always been my favorite album and i didn't ever really understand why. it's not an unconditional affection. i would argue it hasn't held up quite as well as the much-maligned pop, which- though it's a far less solid album- has such an avant garde sound that it could be released tomorrow and floor everyone. am also not a fan of the album version of "who's gonna ride your wild horses." the temple bar remix was better. but narratively speaking, achtung baby is without flaw. and we know how i love to speak narratively.

as a writer, i have to "read" everything- music, novels, poems, etc. and i know we're not supposed to read anything but biography as biography, but- and this could be why i'm a biographer- i think it all is. (a maddening conundrum since while i emphatically believe that, i also emphatically hate to think anyone reads what i write and takes it all as utmost truth. it is but it really isn't but it mostly is, y'know?) so while i can think of achtung baby as not necessarily being bono's journey, i can't see it as just a random collection of kick ass songs. as with a book, there's a cohesive plot. however unintentional or haphazard, there is a story.

as though it were sweet valley high, i can no longer read u2's oeuvre as anything but a continual narrative. because it so obviously is a continual narrative. the continental american tour of the joshua tree and rattle & hum leaves the protagonist dazed and exhillarated, stumbling about the berlin subway system in the opener of achtung baby. he's done with the past and he's frantic for something new. he fucks it up and it takes him thirty-four songs to recover. you could love "mysterious ways" without ever having that context. but, to me, u2 is an important band because of that context.

reading the complete u2- ie. playing their albums in a chronological cycle- my favorite chapter comes between pop and all that you can't leave behind. when the page is turned from the defeated, exhausted plea of "wake up dead man," where the protagonist is literally on his knees begging for the second coming, to the total euphoria of "beautiful day." obviously to get to the beautiful day, you have to plod through a whole hell of crap. lyrically, u2 spent all of the 90s doing this and i'd never before realized how that pulled together to make a central point.

in the grim little trip of achtung baby, there's infatuation, adultery, manipulation, desperation, treachery, forgiveness, euphoria, resignation, love, hope, a phone call from hell and a whole lot of sex. it's about taking a risk and getting burned and wounding everyone around you. it's no accident that the protagonist continues reassuring himself with the line "it's alright." the ticking bomb in "love is blindness" leaves him paralyzed, numbed- by images, the past, the future- in the hypnotic zooropa. for nine tracks, he is "faraway, so close!" yet he cannot let go. he wanders away and doesn't even have the heart to sing the last song himself. instead he hands it over to johnny cash and winds up in the discotheque of pop, the glitzy tangle of conversational tidbits born from a month-long bender in the south of france.

the narrative cohesiveness between these albums has fascinated me ever since all that you can't leave behind was released. all the critics said u2 were "getting back to their sound." what resonated with me was that their protagonist, after falling and crawling and pleading and running and wandering, had finally dragged himself to the ledge and made the jump. the jump that is laid out in "zoo station" when he says he's ready for what's next. when he repeats that he's ready for the push.

and we believe him and we think achtung baby is that jump but it isn't. listen to "mysterious ways" and you hear the line while you can stand there, you could move on this moment, follow this feeling. he wasn't ready for the push in track 1 and he stayed put through track 9. achtung baby and the two albums after are all the scary shit that happens when you don't jump, when you hold back, when you run away, when you try to throw your arms around the world. it's only with the final plea of "wake up dead man" that he at long last takes the leap (i swear he's gliding through the air in the last 40 seconds). and it's only in "beautiful day" that he realizes the leap wasn't so scary after all. that after the flood, all the colors came out.
by oline

Email ThisBlogThis!Share to TwitterShare to FacebookShare to Pinterest
filed under: faith in the city, L (NF), the natural condition, u2 please

i am utterly floored by this. this is the makings of a brilliant academic study of some sort... but i feel like even that cheapens it too much. i need to study my U2 in order to be up to saying a whole lot more.

I will now have "Mysterious Ways" stuck in my head all day. Must find Elton to remove U2. Still trying to figure out how to get my phone to ring "The Bitch is Back". Lovely phone call yesterday.

meggie darling, why you would ever want to remove the u2 from your head, i know not. elton is, of course, a funtastic replacement (and come to think of it- if i were ever to have a gay kid, elton would be the greatest name ever). the phone call was indeed lovely and yeilded my new favourite meggie non sequitur: so... his kisses are really... um... interesting.

the tiny tidbit in the "wake up dead man" thesis that i didn't include because it would have made the sentence structure hella awkward, was that at the end of the song, after what i like to think is the protagonist taking the jump- there's a rogue snippet of chatter. someone in the studio saying something you can't make out but can clearly decipher is a bit of conversation. a bit that proves he made it out of the jump alive, as though there was someone at the bottom of the cliff waiting for him.

that's it. i'm done. no more reads entirely too deeply into things analysisoline!

Oh no! The kiss comment looks so bad in print! They are just...interesting!

honey, the kiss comment doesn't look bad in print. am glad they're interesting. am also glad that their interestingness gloriously emerged sandwiched between a discussion of my work, the smelly nashville river, and those damn spangled purses you bought to make a christmas tree skirt. we are nothing if not enthusiastically random!

*L* Ok, I'm taking a picture of the Christmas tree/skirt, the smelly Nashville river, and my circles for you. I hate those stupid spangled purses. It was kinda fun to cut off all those sequins!

achtung baby is my fav as well, not just for the sound, but because of the lyrics of that album.

i've always thought Bono lost his ability to write good words after that album. he started writing in big sweeping strokes, left out all the small details that make for good writing. but on that album he is open to the point that sometimes i want to turn away.

i think achtung baby is the closest we will come to knowing the "real" bono. every good band/artist has that one album (think Van Morrison on Astral Weeks) where they drop their guard. the voyuer in me loves watching the damage.

i think the edge loves it too. listen to those guitars. listen to how ravaged bono's voice sounds. i want them to bring that honesty back. i'm ready to hide in the shadows and watch a little more.

been thinking about this one and i pretty much agree. bono's lyrical strokes certainly became much grander after achtung. on the last album especially. i despise the lyric: "freedom has a scent like the top of a newborn baby's head." the thought is nice but it's clunky and it just doesn't work and then he kept working in into every interview he gave. achtung baby was their one album that didn't have any of that. the lyrics were spot on throughout and the music was awesome.

but i think he does still drop his guard in the albums after- just in brief flashes rather than an entire twelve songs. you have to camp out in the shadows and wait a good while for it. to me, pop's mofo- as well as being the ultimate road rage song- is the ultimate "real" bono. he's pleading with his mother, afraid for his daughters, disenchanted with celebrity and looking for God. the line "i'm looking for the father of my two little girls"- wow.