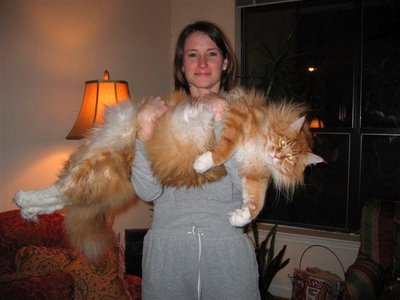 knights of columbus... whose cat is that?

methinks this is croftie's dream kitty. and that his name would be faustus.

i agree with bombsy.... i'm pretty sure this is a shaggy panther wearing a housecat mask. that or this woman in the picture is really 2.5 feet tall.

Oh, Oh!-Lighn! That truly truly is my dream cat. In my dreams, he did indeed tell me that his name is faustus... in deep, languid tones.

he must be aslan's cousin.

Caro!!! I swear that looks EXACTLY like Jack--my brother's ex-cat! The thing was friggin' HUGE!

We should have that cat take on this rabbit.

so much to say. First, unless the pic is photoshoped, the woman looks to be at least normal sized owing to the furniture in the middle background. I believe the beast to be a small child with some sort of lycanthropy.

after a prolonged interactive convo with my father, who was doing "big cat" searches and sending the shocking results as they were discovered so we could bridge the miles with oooohs and aaaaahs and raucus laughter, i can now attest that there are A LOT of big cats. and that faustus here is not the biggest of them.

wonder if owning a main coon cat the size of a dog might be the perfect solution to the need a cat, want a dog but have no room conundrum.

yes, but then you'll be paying to feed a dog-sized cat, and i don't even want to think about what that thing could do to a litter box. would a litter box even be right? litter crate? ewww...

so yes, owning a faustus would probably necessitate a feeding trough and a litter box of unusually large size. but just imagine walking him down the street?! would be like having a miniature lion.

i can see the headline now... "local editor scares children with miniature lion."

Ok, I posted a comment and then your blog ate it. Here's my personal experience with a cat that large...

1. Nick, there is no litter box. Jack had an under-the-bed storage container to use because he was too big for the litter box.

2. Caro, you don't walk a cat that large. Cats that large are psycho and attack random objects/people.

and meggie, please don't shatter my faith in the big kitties. i need to believe they are unspeakably glorious. we're dancing tonight- phone date tomorrow aft?

Umm... I think I can phone date you in for the afternoon. Wow, sounds vaguely perverted. And Caro, big cats are psycho, not glorious. Well, I'll give you gloriously psycho. We found Bella stuck in the corner pointing a water bottle at Jack and spraying him anytime he came too close!!