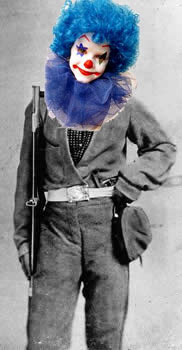 I retract the "Scaroline"
The clown thing surprised me.

don't judge the clown messenger! they scare me too.

am blaming you, bombsy (because i'm psychologically battered by clown run-ins and need to lash out). you, all-knowing, wise one, let me mock the clowns. you should have said: SILENCEO, cupcake!!!! because surely if anyone would know that a cupcake should never mock a clown, it's a bombshell.

um... you don't f^ck with clowns. didn't anyone see steven king's It?

was rather perplexed that up until now everyone had been so nonplussed by that. i made the thing and it scared the hell out of me!