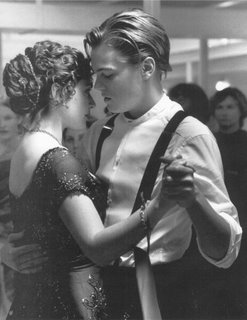 it's pretty well known that croftie and i are too cool for school. there's the whole jack black business, the working in our wacked out field stuff, and our winning though wallflowery personalities. but a slightly less obvious reason for our too-cool-for-schoolness is the weekly Girlie Movie Night. GMN is just beyond.

past GMN's have featured such girlie fabulousness as anne of avonlea, return to me, how to steal a million, dick, bridget jones' diary, the cutting edge, one fine day, and sweet home alabama. this week we took GMN back to its maphy origins with titanic, part 1.

long long ago in maph, we watched the first half of titanic- pre-berg- and were struck by it's chick flickyness. we had every intention of tackling the second part, but it fell by the wayside amidst graduation and moving. this week, we returned to part 1 and decided, really, part 1 is all we need. it's bridget jones on a boat. it's anne and gilbert in the atlantic. it's got deep chocolate layers minus the cookies. it makes us feel 16 again.

just the introductory music was enough to bring a nostalgic tear to our eyes. we recalled sitting in backseats on long vacation rides, sniffling to james horner's plaintive notes and wiping our eyes on flannel shirtsleeves. we remembered thinking my life is so tragic- though we couldn't recall why and we're pretty sure it wasn't. at the time, way back in the winter of 1997, i was wrought with grief that princess diana didn't live to see titanic. as though had she lived three months more, jack and rose's timeless tale might have pulled her from a wayward arab course and assuaged the pains of mental instability. there's something about being 16. stupid things seem so big and the big stuff seem so easily resolved by something stupid.

the most stupidly fantastic element of titanic, that which most endears it to 16 year old girls, is the ridiculously absurd plot. jack and rose knew each other for under a week. yes, he saved her life and that would tend to bring one close to a person pretty quick, but not that close. in rose's shoes, we would have complained that jack called us "rose" too much. we would have rather died than hock up spit in front of him. and we most certainly would have been a little more frightened when he pulled us into that medieval looking gym, stared deep into our eyes and emphatically declared: "i KNOW you, rose. and YOU won't be happy living like THAT." unlike us, rose hemmed and hawed and wound up naked within hours.

but these realities are nothing when you're 16. and james cameron is eerily aware of that. which is why we will love him forever for making titanic, part 1 (titanic, part 2 is a disaster film, and as such is exempt from this girlie movie discussion). we don't know how he did it. the mournful music that tugs at our girlie heartstrings. the beautiful clothes for which we would at least consider life-long enslavement to evil billy zane. the shots that capture every single glorious nuance of the wonder that was leonardo dicaprio's cuteness in 1997.

admittedly, there are glimmers of gilbert grape and we did major lips of disapproval at the nose picking during the roll-in-mouth "make it count" speech and at the post-coitus head-on-the-bosom business. but then there are moments aplenty that set our hearts aflutter. leo chewing on a ciggy during the poker sequence; leo rocking the tux during the fancy dinner scene; leo telling cora she's his "favorite girl"; leo dancing in the jauntily unbuttoned white shirt; and our absolute favorite, leo blowing the strand of hair out of his eyes during the portrait session. even years later, it almost hurts to look. and yet, we have to rewind.

Email ThisBlogThis!Share to TwitterShare to FacebookShare to Pinterest
filed under: girlie movie night, lady di, oline at the movies, TITANIC SHIP OF DREAMS, why leo why