0 you can take the girl out of memphis 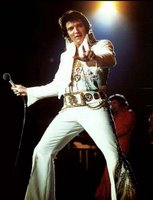 DISCLAIMER: if you do not know me, have never been to memphis, wouldn't cry at the candlelight vigil, and/or hate elvis, don't even bother reading this. if you do know me, don't judge. i'm not crazy, it's my heritage.

i'm very much a memphian and, as such, elvis is an integral part of my heritage. aside from select family traditions (namely, playing elvis carols and hymns during the opening of christmas presents and impromptu recitations of the soliloquy in "are you lonesome tonight?"), the king thing usually only explodes forth in its full crazy glory during Birth Week and Dead Week. fortunately, there's roughly six months for recovery in between. but i missed Birth Week this year, which is the only way i can rationalize this past weekend.

the kingly weekend was fueled by the birthday present bought for Lib on friday. all that night, it's gold cover cast a glow about the room that must have been intoxicating, because come saturday i bolted from the bed to throw on from elvis in memphis (if you're going to own one elvis album, this is the one!!!) and spent the morning cleaning the apartment to the sun sessions, which, in turn, led to the dvd of aloha from hawaii (highlight: the bead of nose sweat during the horn climax of "american trilogy"), which, naturally, put "american trilogy" in my head and sent me racing to hear it again. there was lunch, a walk, and a talk with L, and a few hours of writing to the '68 comeback special, followed by a late night viewing of change of habit- a groovy film where the climactic scene involves elvis (playing a groovy doctor) and mary tyler moore (playing a groovy nun) helping a groovy child overcome her autism by screaming "WE LOVE YOU, AMANDA!" (rent it. now.)

because this was admittedly a crazy amount of elvis for april, i had every intention of ending it there. but then sunday was so windy and rainy and overall gross. a perfect time to organize bills and paper junk with elvis: that's the way it is (if you're going to own an elvis dvd, this is the one!!!) as background noise. and then, of course, the dance class (the nature of which cannot yet be revealed) set the mood for some elvis in hawaii/mexico music (which is all-around fabulousness because there aren't nearly enough american songs with mariachis* singing "ey-yai-yai"). and then eating alone requires some form of watching and the jonathan rhys-myers (who was born to play elvis) elvis tape was right there. after an hour or so rocking the unfortunately titled burning love and hits from his movies, vol. 2, it seemed the best way to cap off the kingly weekend and exorcise the elvis crazies was to throw on the 70s masters and write about it. thank you. thank you very much.

*the bombshell's most profound quote to date: "mariachi music must be the worst to have sex to."
by oline

Email ThisBlogThis!Share to TwitterShare to FacebookShare to Pinterest
filed under: her home is on the south side high upon a ridge just a half a mile from the mississippi bridge, silly things, southerners in the city