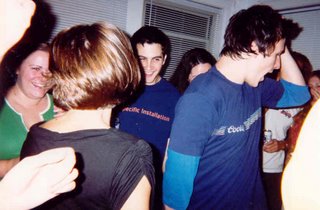 an ESLA envoy went to That Party this weekend. if you spent any time in college or remotely near a college campus, you know That Party. think 150 people, hipster music, and red plastic cups. sound familiar? in college, i never realized That Party went on outside rural mississippi or that we would be going to That Party for the rest of our lives. evidently, we will- just not in trailers. though it was like all the others, That Party, ver. 5/13/06, might have been a bit of a turning point. for the first time i went into That Party with the awareness that most parties are That Party. the variations are limited, excepting halloween (That Party + costumery), cocktail parties (That Party + wine glasses) and birthday parties (That Party - 135 people + presents). and at long last i have fully embraced the fact that i will spend the entire night talking to one person on a couch covered in afghans. that's just how i party.

this That Party was wall-to-wall 21-year-old art and math majors who had just graduated and spent the night clutching cans of PBR while songs from 2003 played in the background, eliciting the wistful: remember when they played this at prom? as i sat on the couch looking at these effeminately beautiful boys, with their identical muffin-top hairdos and brandon boyd earrings, i couldn't help but wonder: are we getting a little old for That Party? after all, they didn't play electric six at my high school prom. but then the after-That Party comes along to redeem any of That Party's shortcomings. the highlight of this evening, the crucial difference between this That Party and the 12,004 others, was that at 2 a.m., we- who had to pee very badly- waited half an hour for a train on the wrong platform only to find ourselves running- one of us drunk and shouting into a cell phone, the other bogged down by a leopard print coat and caffinated to the brink- in heels to catch a subway car full of sleeping homeless people going in a direction we weren't entirely sure was the right one. we sang the books of the bible all the way home.
by oline

at my prom the band closed with AC/DC's "you shook me all night long." needless to say, my prom ruled

(minus the whole mandy "we're breaking up but still going to prom together because of our friends" thing.)

the whole mandy "we're breaking up but still going to prom together because of our friends" thing broke my heart a little.

i went with an ex-boyfriend who had just become gay and we closed with "time after time." unfortunately, we hadn't practiced the routine from "romy & michelle's..." or it would have been a bit cooler than it really was.

Caroline! Bad Caro! Bad! Hey, let's face it. Nothing can top me being your prom date to Junior Prom. The drunk guy at Spaghetti Factory, the leaking water glass... The running the red light ticket on the way home... Ah, prom. How I do not miss those days!

"Time after Time"!!! Are you kidding me?

I have a few songs I have never slow danced to because i want the moment to be righ for them. I'm saving them (for when or whom, i do not know), but that Cyndi song is on the list. So is Percy Sledge's "When A Man Loves A Woman" (wedding first dance). And many others.

a last prom dance to "time after time" when things were falling apart. and you have that story to tell. further proof that the caro is wonderful and amazing in ways we do not yet fully understand.

yes, "time after time" was our prom finale. think that whole bit sounded more sob story that it was. back then, the gay ex-boyfriend thing was almost fun in a grown-up for twelfth grade way. everything was suddenly bizarrely colorful and out of nowhere there was a lot of cher. and there's a hysterical story in it that has yet to be written.

on the "when a man loves a woman" front (and since we're creating a circle of truth here): when i was a kid and had a crazily overactive writerly imagination that had yet to find an outlet, i thought i was destined to be an ice skater and would leap very badly about my bedroom in costumes- my early fashion sense being heavily influced by the frederick's of hollywood catalogue- comprised of my mum's discarded slips, flamboyantly colored knee-socks and purple floral isotoner houseshoes (because slick-soled shoes on carpet seemed like a logical way for ice skaters to practice sans ice- after a broken arm and a sprained ankle, finally concluded maybe it wasn't.), michael bolton's "when a man loves a woman" was always neck-and-neck with michael bolton's "georgia on my mind" as my post-silver medal (because they don't make gold aluminum foil) exhibition program music. that's the first public admission of any of that and i'm an only child. us onlys take it to the limit, so DON'T JUDGE- especially not the bolton! he is a great troubadour of our time.

and to deal with everything in a single, long-winded comment- meggie, you were my prom date junior year (which will go down in history as the origination point of my unending cleavage dramas- trampoline indeed) and my valentine this past year. have we been each other's longest long-term relationship??? i never knew!