this was the week in which all the older, dorky men i had a crush on in 1994 (the edge, PJK, tom cruise, etc.) did inexplicably wacked out things. scary. control yourself, matthew modine! 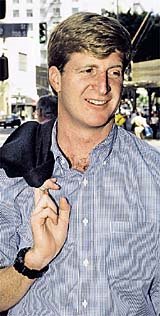 if i was going to marry a kennedy, this was the one. despite the cocaine addiction/bipolar disorder/anger management thing, he isn't too disgustingly older and hasn't raped anyone. he's ambitious (entering politics at 21), tenacious (surviving a spinal tumor), and family-oriented (taking custody of joan after her collapse). never a fan of letting it all hang out, i nonetheless admire PJK's openness. it's such a refutation of the family's tight-lipped stoicism and that takes guts. which is why the oversimplified conspiracy theories and chappaquiddick comparisons are infuriating. maybe PJK is a teddy, but he's also ill, has never hidden that fact, and has spent a decade trying to overcome it and furthering mental health parity policies. so he killed a road block. that's not nearly as ghetto as JFK.

NOTE: as indicated by the teddy posts, the kennedy floodgates have opened. all apologies to my many, many red state readers.

Pompadour,assorted Mitfords, and your Bombshell are very proud of you for defending your man...I will henceforth cease with all "he was drunk" comments. It's probably pretty hard to be PJK...I'd run my car into things, too.

bless you, bombshell. sometimes we all just need to vote!

Your are Excellent. And so is your site! Keep up the good work. Bookmarked.
»