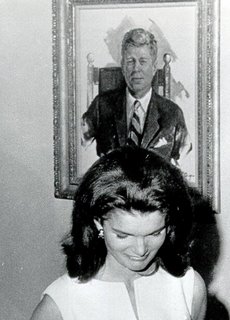 [a crazily dorky english-head moment- with femi-nazi undertones- is about to break out so a bit of background, if you will: i've been a biography addict since 1994. in mid-2003, during a weirdish post-college, pre-chicago emotional crisis, i took to the jackie books- because that is what people who have people do- and have been on a biography binge ever since. therefore, when grappling with big, deepish thoughts- as i'm about to do- the grappling is usually grounded within a biographical, jackie-centric context because that's where i'm most at home.]

biography is the national enquirer of literature. when done badly, it's artificially revealing; when done well, it's intrusive. in reality, we will never know everything about any one particular person and in the modern age, with the glut of information and gossip, historical figures are fast becoming unrecoverable. thus, the central truth of biography is that each work is just as much about the biographer as the subject- if not more so. there are always gaps. the author fills them.

this becomes particularly problematic in biographies of women. the bombshell recently read the sisters: the saga of the mitford family, then went on to reread one of the misses mitford's madam de pompador. she was struck by a line that took it for granted that madam de pomp's happiness stemmed from her total deferrment to the king and his wishes. nancy mitford surmised that this was "as it is in any happy union"- a statement that makes perfect sense when aligned with nancy's own deferrment to gaston palewsi, with whom she was madly in love and whose great love she was not.

this set the bombshell and i off on an email tangent about whether, as a woman, happiness is really based on complete sublimation of oneself, which naturally led to one of our favorite convos- how difficult it is to approach a famous/historical female figure outside the convenient context of husbands. believe me. i've tried. it's tough.

so much of a woman's public identity is based on the man she's with or the drama that stems from that, a disconnect that is evident at the most superficial level of biography. check out titles the next time you're at powell's. for the men- a twilight struggle: the life of john f. kennedy; winchell: gossip, power, and the culture of celebrity; long live the king: a biography of clark gable; the survivor: bill clinton in the white house; the last czar: the life and death of nicholas II; andy warhol: the life of an artist; capote: a biography.

and now for the ladies- mistress to an age: a life of madame de stael; vera: mrs. vladimir nabokov; the silent woman: sylvia plath and ted hughes; the most beautiful woman in the world: the obsessions, passions, and courage of elizabeth taylor; the truth about hillary: what she knew, when she knew it, and how far she'll go to become president; and two of my personal favorites- painted shadow: the life of vivienne eliot, first wife of t.s. eliot, and the long supressed truth about her influence on his genius, and jacqueline kennedy: the warmly human life story of the woman all americans have taken to their hearts, including the latest events in the life of this magnificent woman.

titles devoted to male subjects are largely defined by chilly detatchment, while those pertaining to women are overheated and clunky. it's indicative of a difference in the way books about men are marketed and sold versus those about women. incidentally- five of the seven books listed in the paragraph above were penned by men, so this isn't a simple matter of feminine effusiveness.

currently, the starting point with any female biographical subject is as wife or lover. madam de stael is considered a key figure in the development of the novel and one of the leading french philosophes. her work is set on par with that of rousseau and voltaire. yes, she was sexually liberated, but the title mistress to an age suggests she methodically bedded the emperor's entire army, an exaggeration that undercuts the significance of her work.

at both the historic and iconic levels, jackie onassis' was arguably the most significant female life of the past century. and yet, how lazily biographers have wrestled with her. again, titles say it all: mrs. kennedy: the missing history of the white house; jack & jackie; jackie after jack; just jackie; jackie; jacqueline bouvier; a tour of the white house with mrs. john f. kennedy; jacqueline kennedy onassis; jackie and ari; the onassis women; and the ever-popular, jacqueline bouvier kennedy onassis (so fitting that it has been used on three occasions).

in biographies, JFK is summarized by his war experiences, one night stands, politics, or unfulfilled possibility. jackie is reduced to fashion, decorating and husbands. what are the odds that if JFK had outlived jackie, there would have been a book entitled jack after jackie? i'm thinking slim to none.

an argument grounded in book titles may seem superificial. particularly titles regarding jackie onassis, who has become more of a visual image than an idea or an actual once-living person. but it must say something about the genre and the culture that one of our greatest icons is almost exclusively approached through her names, one of which, ironically, is a feminized derrivative.

admittedly, in the case of most of the women discussed here (plath, jackie, vera, hillary), marriage was a ticket to fame- not that they consciously considered it such but that they married up-and-coming powerful men who were already accompanied by some degree of public exposure. but it isn't hard to imagine that hillary would have eventually become hillary with or without bill's help. that plath would have found her poetic voice with or without ted hughes.

jackie's is a different, more nuanced story. i think she would have married someone who wasn't JFK and perhaps not have been tremendously happy. but outside the apex of east coast society, she might have also had the freedom to write and paint and sculpt as she wanted, instead of simply being friends with those who did. the jackie i just described- the witty writer whose friends warned that she would be diminished by JFK; the frustrated artist who told photographer peter beard that she wished she could do what he did but she didn't have the guts- only surfaces in two biographies. and it is a fleeting appearance at that. though the jackie icon is a veritable mine of possibilities, the biographical subject has been cruely fenced in by wifely nomenclature.

my beloved wayne koestenbaum wrote, "'mrs.' seemed in jackie's case, always to be concealing half-truth." this then is the fundamental "female trouble" of biography. society/media/biographers/readers (us) are so hung up on the "mrs"- metaphorical or otherwise- that all the fascinating, characterizing concealed truths are flattened. thus, within the written record, our women truly are little more than beautiful, silent shadows. and that's not nearly enough.
by oline

Email ThisBlogThis!Share to TwitterShare to FacebookShare to Pinterest
filed under: jackie oh oh oh, kennedyland, reading in the city

And if we're going to define a woman by her man (grr) why not her son? At least then it's a question of creation and shaping rather than accessorization.
And here's another thing...now that women have gained enough ground to actually hold thier own in the political arenas of the world (Hillary, Condi, Albright, Thatcher) have you noticed that THE FIRST thing everyone talks about is how they look? I WANT Condi to look tired and worn-she's the GD Secretary of State, and we're at war!!!!