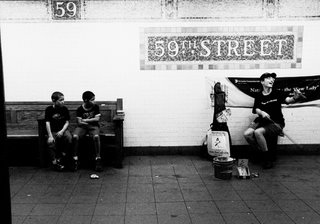 the other day i took the red line into town for a bit of quality h&m time. i really love the trains. buses confuse me endlessly- they're usually late, you can never hear the stops and there's way too much togetherness with people who don't bathe regularly. the buses feel very 8th grade. but oh the trains! so fast. so timely. so comprehendable. comparatively, so much cleaner.

the primary downside to the trains would be subway performers ("sperfs"). there's something very unkind about having music forced upon you while waiting for urban transit. maybe if yanni or john tesh or norah jones set up shop, i could take that. gentle, soothing keyboards would be tolerated and obviously yanni or tesh would make for a good laugh. the subway is one place where elevator music just might not be so bad. but in enclosed spaces, a horned instrument is never welcome- much less a trio of them. the boombox is even worse. in the past 10 years, very few people have ever cut a record deal when a boombox was present. the boombox itself (doesn't the name just make you laugh?!) is an anachronism. it's so milli vanilli. it's so not loud enough to warrant microphoned vocals.

do harried record execs really troll the subways at 4 p.m. scouting for talent? even more to the point, is this the best talent we've got? because, people, i think we can do better. at washington, a girl was belting out "tomorrow" from annie (and i won't even begin to pass judgement on that choice). she looked like a "peanuts" character, with her head thrown back as the words screeched forth from her. as one, the crowd awaiting the train moved a good five feet away.

the sperf is part american idol dropout, part dictator. they so want us to give them our vote of approval- to stop and listen. they are the neediest of musicians. yet, there's something terrifically presumptuous in the simple act of imposing your musical stylings upon a crowd who are heading home at the end of a long workday and, thus, are too tired to voice the opinion that you aren't very good. i admit it takes guts to whip out your boombox and belt a song to complete strangers. but at the same time, the cruelty of inflicting your "talent" in an underground tunnel is boggling.

i generally try to imagine that sperfs aren't there- which might mean i'm missing out on one of the city's greatest cultural experiences but alas, most everyone else is too. i don't like being sung to. and while the sperfs aren't singing directly to me, the venue is small enough and their neediness so glaringly apparent that it's still unsettling. they want so much- attention, listeners, a record deal. i can't handle it. so i turn up the nada surf, stare straight ahead, do the brisk city walk, and dream of h&m. ah! h&m!
by oline