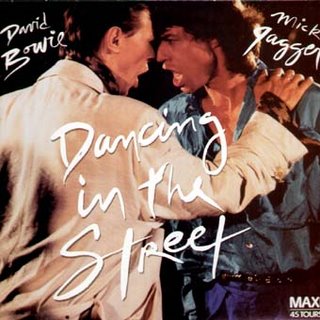 select ESLAs are taking lessons of a nature that cannot be revealed at this time. suffice it to say- we're dancing. last night was our third of six lessons and we just got good. up to this point, we've had fun, but not smashing, unable-to-form-a-complete-sentence-afterwards fun. not Big Fun.

my first partner- The Tall Guy- introduced himself by cracking an udder joke. the sheer horror that is the word udder didn't exactly make me eager to hold his hand. the first week was all about moves that were vaguely akin to aerobics steps so we clumsily struggled to keep our As, Bs, and Cs from morphing into grapevines.

the second week, the girls far outnumbered the boys so we partnered exclusively with instructors. a little awkward due to the expanse of downtime spent against the wall watching couples cha-cha and feeling like the homely girls at prom. but then the instructor- who evidently considers his job an onerous chore and looks impossibly bored most of the time (and who in the first lesson thoroughly undermined his credibility by doing the gayest ever impression- that has been seared onto our brains- of dancing in a grocery aisle)- stands in the middle of the floor, puts out a hand and nods in our direction- much like the king selecting a partner at versailles- indicating he will now deign to dance with us.

it's tricky because for the woman to be at all good requires the man to be an excellent leader. and, or course, men who are just learning to dance have a pretty difficult time leading steps they don't know themselves. this is how i spent an hour stumbling about the floor with The Tall Guy as i passively led, repeating- "and now you move your left foot forward." this is how L wound up trapped in a series of windows last week, making baleful eyes as her partner- The Guy Whose Name Begins with an A- yo-yoed her back and forth for a solid three and a half minutes because he didn't know how to conclude the step.

a classroom situation where your face is less than a foot away from someone elses makes for plenty of comedy. in the first lesson, Black T-Shirt Guy started off making crazy raise the roof hands, which, much to our dismay, resurfaced last night. L was partnered with The Close Dancer who kept asking if she was "comfortable" (an inquiry that made her ever more uncomfortable). The Tall Guy's waterfall went awry and smacked me in the face. Les danced with The Bald Guy, who made grunting sex faces the entire time. we've all danced with The Little Guy Who Takes Littler Steps, whose hips jump with such a frenzy it appears he's about to dance out of his pants. added to that is the pressure of avoiding The Fast Dancing Couple, who have nearly run over us all.

fortunately, the men are getting good. The Little Guy Who Takes Littler Steps (and so helpfully pointed out that my ginormo steps looked like lunges in comparison) was completely out of my league but The Guy Whose Name Begins with an A made me feel somewhat competent. yes, it took us twenty-three straight tries to do the window/twist/turn move, which left me dizzy and incoherent for hours after, but we got it on our own. and when i looked in the mirror and saw us all red-faced yet clearly dancing for real and felt the snap of my arm and swirl of my skirt as he led me into another window/twist/turn (because the window/twist/turn was the only move we knew), i almost could have danced all night.
by oline

Interesting website with a lot of resources and detailed explanations.
»