1 "someone" took him too high 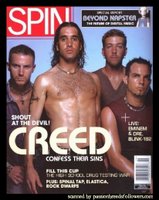 "Someone" Out to Get Stapp
By Joal Ryan

Scott Stapp doesn't think too highly of "someone."

The Associated Press released quotes Wednesday from an AP Radio interview in which the former Creed singer accuses "someone" of being behind the recent release of a sex tape.

"Obviously, someone wants to hurt me, and doesn't want me to be successful in my solo career," Stapp told AP Radio.

Kid Rock, who is seen along with Stapp in the sex tape entertaining female fans in a tour bus, was located for comment. He told AP that Stapp was "an idiot."

"The tape gets out--it's your tape--and you're [saying] someone's trying to sabotage your career?" Rock complained to the AP.

The solo career that the 32-year-old Stapp sees as being plundered by "someone" began in earnest with last November's release of The Great Divide. Whereas Creed moved tens of millions of CDs during its 1990s heyday, Stapp saw only 94,000 copies of The Great Divide ring up sales in its first week. It was not known if Stapp explained to AP Radio how, or if, "someone" put the kibosh on the album.

What rankled Rock was Stapp's theory on how the X-rated Internet home of the Paris Hilton vehicle, 1 Night in Paris, came into possession of a 1999 tape featuring him and Kid in the company of women, also known as "strippers," per the AP. According to Stapp: "Someone" stole it from him.

Red Light District, the self-described leader in the field of "hardcore gonzo video," has denied the footage was of the purloined variety. Rock, for one, has said he doesn't care how the company got the tape.

"[Stapp] is the idiot because it's out," Rock said, per AP. "I'm holding him responsible."

In court, however, Rock is battling Red Light District. On Feb. 21, he won a preliminary injunction barring the company from posting the tape on its sites, ScottStappSexTape.com and KidRockSexTape.com.

While Rock is mad--he says he never dabbles in homemade movies--Stapp is full of regret. If the "artist who's a Christian," as Stapp once identified himself, had to do it all over again, he told AP Radio, he would have "burned that tape."

But Stapp didn't destroy the footage--filmed when he was between marriages, he pointed out--because an evening spent entertaining female fans also known as strippers is something for the scrapbook.

"You think it's part of your rock 'n' roll memories," Stapp said, per the AP.

Of late, Stapp has been making new rock 'n' roll memories at a quick clip. Last December, the New York Daily News reported that an "apparently intoxicated" Stapp acted boorish during the taping of Spike TV's Casino Cinema. On Feb. 10, an "antagonistic" and newly married Stapp was stopped from boarding a Los Angeles flight to Hawaii, and arrested on suspicion of being drunk in a public place. There was no mention of "someone" being involved in either incident.

Stapp is due to be arraigned on the public intoxication charge next week.

Amid this drama, Stapp is on tour. And although he's not attempting to play arenas, he's having trouble selling tickets at smaller venues. At least that was how the Orlando Sentinel described the state of things at Stapp's Feb. 23 kick-off date at the Hard Rock Live in the singer's native Orlando, Florida.

Far from being downcast by the sex tape scandal, the struggling album, the upcoming court date, the machinations of "someone" or the bandaged right wrist that an insider told the newspaper was dinged up in a surfing excursion, Stapp was "chatty" with his audience, the Sentinel reported.

"I need this so bad," Stapp said, according to the newspaper.

Stapp is due back on the stage Thursday in Hartford, Connecticut.

That is, unless "someone" has other ideas.
by oline

I have to say, that is the nastiest chest picture I have ever seen.