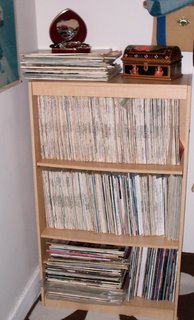 my closet was a big junk pile of magazines so i ordered a bookshelf that arrived yesterday. it came in pieces and was somewhat daunting. a friend of mine had once lusted after a "computer tower." he finally bought it, brought it home, and spent an entire weekend assembling it with a battery-less dremel tool and a pink speckled hammer. by the end of it, he hated the thing. it became the point at which everything in his life went downhill. was haunted by that as i spent the evening taping together faux wood strips and trying to determine which was the "unfoiled" side. in the end, it came together lovely.

and of course, within twenty minutes of assembly- it was stuffed completely full.
by oline

I made my bookshelf from wood that I pillaged from other places. I named it Marzippan. A bastardization of the treat because it is a bastardization of a bookcase. I looked sad and disconsolate when I first made it. Nay-sayers said that she would never hold any books let alone the plethora that I have aquired over the sum years since I have created her. Let me tell you that it is hard putting a bookcase made from oak with just a hammer and lots of nails. Oddly enough she is held together with physics. All the weight that is on her(~400lbs) keeps her together. Amazing and I love her. You would be proud that I don't just read fantasy novels anymore. I really have started branching out. I just read a couple fantasy a year and the rest are all over the place. Well, you might not be proud but I am. I never wanted to be one of the guys who only reads fantasy and says that literature sucks. Wait, wait. Am I the first to comment on your blog?