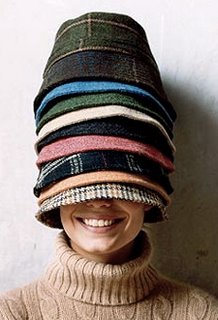 in chicago, the weather- preparing for it, being in it, coping with it, recovering from it- consumes roughly 13% of your daily life. and there's something about the city that infuses the ordinarily embarrassing convo stopper- "how's the weather?"- with a sense of social acceptability. in memphis, you complain about the weather- because it's usually hotter than you think you should ever have be- but it's not earnestly discussed. it is in no way used to make conversation.

it has become standard procedure that one of my co-workers- a man so cool he has his hair done weekly- will end our convos with the stale line "how's the weather?" i'll say something stupid like "brrrrr," and he'll mention that it was 75 there today and i'll practically purr with the delight of it being 75 anywhere in the world. these are our assigned roles in the conversation- as a person in cold, windy chicago speaking to a person in balmy, humid memphis. and when you think about it, this is kind of kinky. when people in cold environments come into contact with people or objects representing considerably more pleasant climes- it can be downright porny.

case in point: during the bitter winter of graduate school, the j. crew "cruise collection" catalogue was some serious season-porn. it was the coldest night of the year and i had walked the 10 blocks from school after an endless night class and arrived (frozen) to find a magical, springy j. crew inhabiting my mailbox. i held it in my hands (sheathed in two pairs of gloves, one pair of mittens), pushed my hair out of my eyes (up into my hat and ear muffs and under my scarf), kicked off my boots (keeping on the three pairs of socks), leaned against the radiator, and lost myself in a world where carefree, sun-kissed people wore brightly colored shorts and held chilled drinks in their bare hands.
by oline