0 confessions of a bonnie bell girl 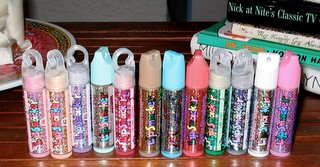 i have two addictions. one is diet coke. 2-3 a day, except for very very special days. the other is bonnie bell chapstick.

in the twelfth grade, when lindear had lost her bloom and no one else had, she devised a "how to get kissed" list. the only thing i remember was that you were supposed to wear flavored lip gloss. there were like four stars by that one so from the moment that note landed in my lap, i've been a bonnie bell girl.

they're EVERYWHERE. at this very moment, there are at least six sticks in progress- one on the windowsill, in the nightstand, two in the desk, in the pocket of both the blue and brown coats, in the green purse, and in the silverware drawer. that doesn't even include the back-up sticks- the not quite as good flavors that have been stashed in random other bags and coat pockets in case of a chapping emergency.

i've been using bonnie bell so long that my original trademark flavor- strawberry banana- was discontinued, forcing a switch to watermelon, which has also since been discontinued. so i've now embraced the entire line- from cookie dough to sugar sprinkles to starburst.

a former user herself, my mum has defected the sugary bonnie bell world for salves with a decidedly medicinal tint. but yesterday, she sent the most beautiful gift. the entire bonnie bell winter line- purchased on clearance (who knew chapstick went out of season???). ah. the magic that can be had for $4.97.
by oline