0 am i the trashiest person ever? 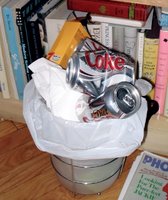 a roommate once said i was the trashiest person ever. he always said this with an exasperated, pained expression as he was hoisting the garbage to take it outside. i always replied that when two people live together, they obviously make twice the trash- but now am having doubts.

am i really the trashiest person ever?

upon closer examination, there are several elements that make it almost impossible for me not to appear to be rather trashy. first, the preponderance of very small trash cans. why do they even bother to make mini-cans? throw in a kleenex and they're brimming over. senseless. and somehow i have ended up with three of these which, when scattered throughout a teeny apartment, create the sense of living in a landfill.

second, an accidental purchase of one gallon trashbags has perpetuated the mini-can problem. clearly they're intended as a companion to the mini-can, but for a writer who tears up paper and goes through 5 gallons of milk and countless diet cokes a week, nothing could be stupider than a one gallon trashbag. at least with a larger bag you can pull it up and contain the garbage. the one gallon bag offers no leeway. it is unforgivingly cruel.

the third aspect- which probably most convincingly proves my trashiness- is that my very consumption guarantees a considerable amount of garbage. a gallon of milk every 2 days, 2-3 diet cokes a day, misc. cat business, work stuff, and lots of junk mail make for a goodly amount of waste. not only that, but since my parents always stop off at costco before coming, a percentage of the garbage is of a crazy huge size. cereal boxes twice as large as the mini-cans themselves.

so there you have it. living and working with a cat in a home of teeny trash bags makes it nearly impossible to stave off trashiness. acceptance. i AM the trashiest person ever.
by oline