0 putting the oline back in the city

we left at 5.30 yesterday morning- looking frightfully sleepy and very much like people who should not drive large motor vehicles. my family loves to travel but we aren't very good at it. means we have a vast array of travel calamity stories and this move back to chicago will undoubtedly take it's place in the family lore. almost immediately i picked up a bottled water and the lid blew off shooting water all over the front seat. didn't see that as a bad thing until we stopped at a rest stop and our pants were freezing when we got back in. less than an hour later, this very odd smell began to overtake the car. took my mum and i a second to figure out the cat had pooed. this unfortunately happened in a stretch of missouri where there are no gas stations so we drove quite awhile alternating between gagging and laughing hysterically and making cracks about pooh corner.

there were a couple hours of uneventfulness and a cracker barrell stop before the tornado weather we'd been hearing about caught up with us. my mum tends to give vent to her fears by repeating them aloud and then feeling enormous comfort afterward, at which point her companion will be overwrought with the worry that had inflicted her. so it was when she said at least thirty times, with a baleful glance skyward: "i don't like the look of that. i really don't like the look of that." we kept entering the counties almost exactly as they announced warnings for them on the radio. then we lost the station which always seems to indicate the apocalypse. fortunately, we either beat the storm or it died down but made it into a suburb of chicago in the late afternoon.

went to the local bee (which made me eternally grateful for working in my field) and the nightwas pretty uneventful. woke up this morning to find the cat (who we'd snuck into the hotel, feeling tremendously guilty all the while) was missing. kept looking under the beds and finally noticed that something in the box spring was moving. was convinced i was imagining things and almost didn't mention it but suddently hit me that genevieve had somehow gotten up into the boxsprings and the parents had slept on my cat all night long. ended up standing the matress and tearing it open and pulling her out. she did not seem contrite. 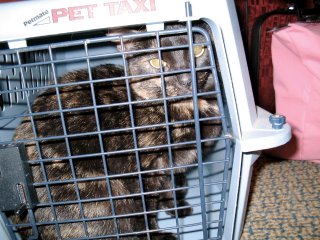 after the cat drama, we drove into chicago- only briefly pondering the prospect of going local rather than express, managing not to get lost and picking up D. along the way. spent hours stuffing everything i own into my little box of a home. powered through the day fueled by diet coke and a divine frances' grilled cheese. the end result is a serious case of the move-stupids and a bazillion boxes and tubs. 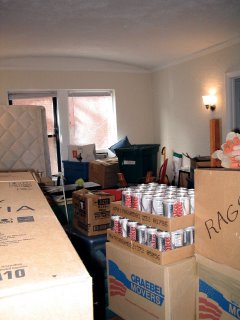 after hauling an english-head library through three moves in a year and a half, the oline will definately be staying in the city for a long, long time.
by oline

Email ThisBlogThis!Share to TwitterShare to FacebookShare to Pinterest
filed under: la vieve, the move