about a month or so ago my dear friend lib said that not a day goes by that she doesn't think about her grandmother and the cat of her childhood. yesterday, before we spent the night trying to go bowling, L. and i mused about how we ever lived without our new cats and thought how funny it is that silly animals can get so under your skin and become family. my grandmother always says to my grandfather, "there you go living in the past again" so it's my heritage and must indulge:

when i was a kid, we had this enormous collie named arthur. initially disowned him because my puppy was supposed to be named lucy, and arthur was very much not a lucy. but quickly my entire family fell in love with this big old hairy dog. my mum had a thing for artherian legend but the name was immensely appropriate because he was so regal- would hold the door open with his nose and let me lay on him like a couch.

my father is an amateur photographer and arthur is in practically every other picture in our albums dating from 1985 to 1997. arthur went swimming and camping, played badminton, rode in the landcruiser, and holidayed at gran and pawpaw's. when we travelled, he would eat a mcdonald's hamburger for each meal (the top bun, the bottom bun, then the meat) and french fries for dessert washed down with a glass of water from the cup.

when we were living in atlanta, we got this crazy little brown and silver collie named abby. she must have been abused before because she was a complete spazz and freaked out over the slightest movement. she and arthur had a litter of nine puppies one christmas- giving my father nightmares that we wouldn't be able to sell them and he'd have a herd of eleven collies to tend to. but we sold the puppies and at some point abby was given away too.

there was this massive hill near our house and arthur and i would race down it together. i always pretended like we were in the olympics- in some oddball hybrid of skiing, track, and dog racing- but we would get going so fast we'd end up running a half block afterwards just to slow down. it felt like flying and we'd turn around, climb the hill, and do it again and again and again.

arthur ran away twice when we were living in nashville. i'd walk home from school to find him patiently sitting on the front porch waiting for me. when i was in the seventh grade, we got this beautiful white collie and named her lucy. she was gorgeous but a little dim. think she had a major crush on arthur. when he died, she sat in her doghouse for a week with her head laying on her two front feet looking like the saddest thing that ever was. she finally became a house-dog and perked up a bit but was never quite the same.

arthur died nearly ten years ago and i swear my family is still in mourning. our eyes mist over whenever his name comes up in conversation- and it inevitably does because he set the standard for all our dogs since, who can never quite measure up. my grandfather confessed last week that he remembers arthur nearly every day, which was startling since he's not even a pet person. it's funny though because pets aren't people obviously, but they make you feel more alive somehow. or they at least make your life richer and, judging from the weekend genevieve's had, whimsical. 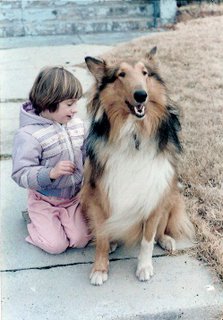